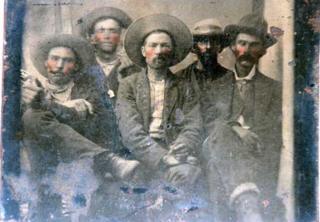 A photo discovered by a US lawyer at a flea market may be a rare image of Wild West outlaw Billy the Kid and could be worth millions, experts have said.

Frank Abrams bought the tintype photo in North Carolina for $10 (£7) and put it up in the guest room of his home.

He consulted experts after watching a TV programme about the discovery of another photo of Billy the Kid.

Historians told Mr Abrams his photo may show the outlaw with his future killer.

Mr Abrams, a criminal defence lawyer, bought the tintype photo – which is an image produced on a thin sheet of metal – at a flea market near the city of Asheville in 2011.

He told BBC News he decided to have it analysed by experts at the Billy the Kid museum in New Mexico after watching a programme in 2015 about a newly found photo of the gunslinger playing croquet.

The croquet photo had been valued at around $5m.

Mr Abrams came to suspect that one of the five men pictured in his tintype image was Patrick Floyd Garrett.

Garrett and Billy the Kid were said to have been close friends until Garrett became sheriff of Lincoln County, New Mexico.

Sheriff Garrett is remembered for gunning down the outlaw in 1881.

Mr Abrams said his photo – which is dated 2 August 1880 – hung for several years on the wall of a spare room in his home that he rented out through Airbnb.

"If I had known it was one of the most famous photos in history, I would have charged more for the room," he laughed.

Mr Abrams enlisted Robert Stahl, professor emeritus at Arizona State University, as well as several other forensic experts, to identify whether his image did indeed show Sheriff Garrett and Billy the Kid.

William Dunniway, a tintype expert, told the New York Times the photo was probably taken between 1875-80.

Mr Gibson used facial recognition software to conclude it was most likely a photo of Billy the Kid and Sheriff Garrett.

A handwriting expert in Texas compared a signature from Sheriff Garrett on the photo with 10 documents that included his handwriting.

He found a match, the Associated Press news agency reported.

Although experts say the photo may be worth millions of dollars, Mr Abrams says he is no rush to sell it.

"I've never put a price on it," he said in a telephone interview with BBC News.

"My interest is in the history," he added.

The image that experts say shows Billy the Kid playing croquet was bought in 2010 for $2 from a junk shop in Fresno, California.

The only other authenticated portrait of the gunslinger sold for $2.3m in 2011 at an auction in Denver, Colorado.

That tintype depicts the gunfighter in rumpled clothes and a hat, gazing at the camera and holding a Winchester rifle.

The outlaw – who was born Henry McCarty but later took the alias William Bonney – was reputedly born in New York.

He is thought to have moved to Colorado with his mother and brothers when his father died.

The gunslinger fell into a career of thievery and lawlessness and was hunted across the southern US states and northern Mexico.

He is widely thought to have killed 21 people, though some sources put the figure as high as 27.

Billy the Kid was captured and sentenced to hang for the 1878 murder of a county sheriff.

He escaped, only to be hunted down and killed by Sheriff Garrett on 14 July 1881.