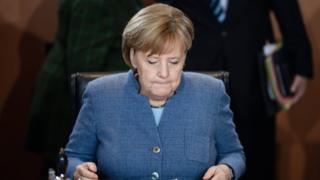 The German president is pursuing efforts to broker a coalition deal which might include the centre-left Social Democrats.

The move comes after talks between Chancellor Angela Merkel's Christian Democrats party, the pro-business Free Democrats and the Greens collapsed.

A "grand coalition" between Mrs Merkel's conservative party and the Social Democrats (SPD) is one option.

Another option is new elections, a path preferred by Mrs Merkel.

The FDP said it would not dismiss the possibility of further talks with Ms Merkel's conservatives and the Greens on a coalition government if a "completely new package" of proposals was put on the table.

"If it really was possible to build a modern republic in the coming years, then we are the last ones who would refuse to talk. I can't imagine that this will work," the Free Democrats' Secretary General Nicola Beer said to German television station NTV.

Germany has been without a stable government since elections on 24 September produced no overall majority.

This week, President Frank-Walter Steinmeier is meeting separately with the leaders of the political parties in order to try to break the stalemate.

Pressure is growing on the SPD to try to form a coalition with Ms Merkel's party. The SPD has so far refused to enter into a "grand coalition" of the two largest parties in the German parliament.

Andrea Nahles, head of the SPD parliamentary group, said the party did not want to prop up Mrs Merkel again.

"We are not an emergency stop-gap for Merkel," she said.

Facing the biggest crisis of her political career, the chancellor has said she would prefer new elections to an unstable minority government.

The finance minister and chancellery head, Peter Altmaier, has urged the parties to sort out the situation.

"We must be in a situation in the next three weeks where there is clarity about whether there can be a stable government on the basis of this election result," Mr Altmaier told ZDF television.

Until a government is agreed, Ms Merkel continues as acting chancellor and previous ministers remain in post, while the German parliament sits as normal.

IcetruckNovember 22, 2017
Like story:
tweet
Le Pen decries ‘fatwa’ on National Front bank accounts
‘DWTS’ winner will use his trophy as a Thanksgiving centerpiece