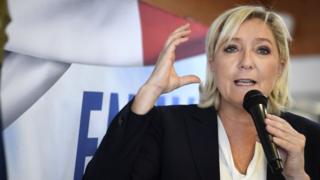 Marine Le Pen has claimed her National Front party is the victim of a "banking fatwa" after banks closed its accounts as well as her own personal account.

The leader of the far-right party told a news conference she would be lodging complaints against Société Générale and HSBC.

Under French law, banks are allowed to close accounts unilaterally.

But Ms Le Pen accused "financial oligarchies" of trying to "suffocate" the political opposition and democracy.

"This is a political decision on the part of Société Générale and not a dispute between a customer and their bank," she was quoted as saying after insisting the party's finances were stable.

Ms Le Pen has been fighting for her political life since losing May's presidential election to Emmanuel Macron and performing poorly in subsequent legislative elections.

Her party has been riven by feuds, she has been put under formal investigation over a European Parliament funding scandal, and earlier this month she was stripped of immunity from prosecution over a series of grisly images she published on Twitter.

This is not the first instance of antagonism between the National Front (FN) and the banks.

In 2014, it accepted Russian loans of €11m (then worth £9m or $15m) when French banks declined to lend it any money. It was also refused loans to fund its campaign for the presidency, and has subsequently appealed directly to supporters for loans.

Ms Le Pen said the FN would be filing a complaint against Société Générale and its subsidiary Crédit du Nord. She also vowed to complain to HSBC after, she said, it closed her own personal account.

None of the banks confirmed that they had taken these steps, citing rules on confidentiality.

The FN's banking relationship with Société Générale is said to go back 30 years.

In France, banks are allowed to close accounts without notice or explanation. However, access to a bank account is a right in France and the Bank of France can designate a bank which is then required to open an account.

The FN's complaint against Crédit du Nord is that when it was required to open an account it then refused to process cheque and credit card payments, reports Reuters news agency.

IcetruckNovember 22, 2017
Like story:
tweet
ANALYSIS: Health care quality will improve for all, if we have a federal watchdog
German coalition talks: Merkel seeks to break stalemate