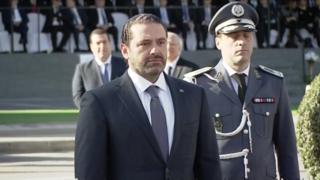 Lebanese PM Saad Hariri back in Beirut after shock resignation

Lebanese PM Saad Hariri has arrived back in Beirut for the first time since announcing his shock resignation in Saudi Arabia more than two weeks ago.

Mr Hariri was greeted at Beirut airport by members of the security forces as he disembarked from his plane.

He caused a political crisis and stunned many in his country when he quit during a visit to Riyadh.

Mr Hariri denied speculation that Saudi Arabia had forced him to depart as part of a regional power struggle with Iran.

Lebanese President Michel Aoun has refused to accept his resignation until he presents it in person. The pair are due to meet later on Wednesday.

Analysis by the BBC's Martin Patience in Beirut

Shortly after landing in Beirut airport, Mr Hariri was asked if he had a message for the Lebanese people. He responded by saying, "thank you".

But the prime minister has a lot of explaining to do – this is nation waiting for answers. Why did he resign in Saudi Arabia? And is he actually going to follow through and step down?

Mr Hariri led a national unity government, which included the Hezbollah movement. It's backed by Iran and has a powerful armed wing – many say the group effectively runs Lebanon.

Saudi Arabia – like the West – labels it a terrorist organisation and appeared with this move to be seeking a confrontation. But other than tough rhetoric that's yet to happen on the ground. Many argue that Saudi Arabia has over-reached and following international pressure is now looking for a face saving solution to resolve this crisis.

On Saturday, Mr Hariri flew to Paris where he met French President Emmanuel Macron, who has been trying to broker a way out of the stalemate.

While in France, Mr Hariri vowed to return to Lebanon to take part in independence celebrations on Wednesday, adding: "It is there that I will make known my position… after meeting President Aoun."

After landing at Beirut airport, he read a prayer at the grave of his father, Rafik al-Hariri, who was assassinated in 2005.

Mr Hariri abruptly announced he was resigning during a trip to Saudi Arabia on 4 November.

In a televised statement, he said he feared assassination.

He also accused Iran of sowing "discord, devastation and destruction" in the region and alleged that the Hezbollah group was destabilising the nation.

President Aoun accused Saudi Arabia of holding Mr Hariri against his will but both the Saudis and Mr Hariri denied this.