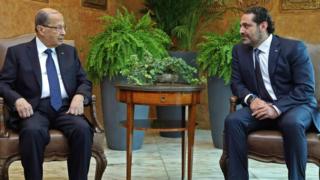 Lebanese Prime Minister Saad Hariri has "temporarily suspended" his surprise resignation, which he announced during a visit to Saudi Arabia two weeks ago.

Mr Hariri said he had presented his resignation to President Michel Aoun, but that he was asked to "put it on hold ahead of further consultations".

The two men held talks a day after Mr Hariri returned to the country.

Mr Aoun had insisted Mr Hariri submit his resignation in person, alleging it might have been made under duress.

Mr Hariri has denied speculation that Saudi Arabia forced him to resign and then detained him in an attempt to curb the influence of Iran and its Lebanese proxy Hezbollah, which is part of Lebanon's national unity government formed last year.