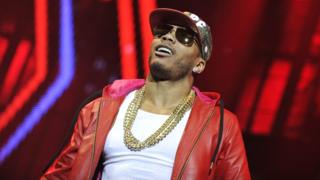 It's a collaboration which should unite the East and West through music but instead it's dividing men and women in Saudi Arabia.

US hip hop artist Nelly and Algerian singer Cheb Khaled are scheduled to perform a concert in Jeddah on 14 December.

But the event is open to men only and although the response has been overwhelmingly positive, some women in the country are angry.

On social media they questioned why they were being excluded from the concert organised by the Saudi privately-owned TV channel MBC Action and supported by Saudi Arabia's General Entertainment Authority.

On Instagram a disappointed post by @kidshop_ksa read: "ليش بس رجال". Which translates to: "Why is it male only?"

Another user made the same observation on Nelly's own Instagram post of the event: "Its so sad that girls are not allowed to be there and see you??????"

Others suggested that as the rapper had been arrested for marijuana possession in 2015 and accused of sexual assault last month he should not be allowed to perform.

Despite charges for drugs possession, for which he did not serve time in jail, Nelly has always denied the allegations of rape made by a college student and has not been charged.

Not everyone was enthusiastic about the concert. One Twitter user posted: "God please do not hold us responsible for the actions of the foolish among us. What is even worse are the girls who are demanding to attend."

While another tweeted a preference for Ariana Grande to perform instead.

It is not the first time a major US artist has been invited to perform to a male-only crowd.

In May country music singer Toby Keith appeared in Riyadh during the same weekend that President Trump visited.

That concert was open just to men aged 21 and over, who were required to dress in traditional Saudi tunics.

Some reports suggested that Keith, whose musical repertoire includes songs like Whiskey Girl and I Love This Bar, was asked to tone down some of the content in a country where alcohol is banned.

It is not clear whether Nelly will be asked to do the same given that his most popular song, Hot in Herre, asks women to remove their clothes.

Traditionally large public events like concerts have been restricted in the Kingdom partly due to its strict morality laws regarding alcohol prohibition, modest clothing and gender segregation.

Most public places including restaurants and cafes have two sections, one for just men and one for families, which are for women and their husbands and families.

Some malls even have women-only floors where men are not allowed to enter. However recently Saudi Arabia has been taking steps to portray itself as a modernising country.

Last year Saudi Arabia's Crown Prince Mohammed bin Salman backed the establishment of the Kingdom's General Entertainment Authority. It's part of its Vision 2030 plan to expand the economy beyond its reliance on oil.

However, the authority's plans face regular push back. When it organised the recent National Day celebrations both women and men were permitted to attend and mix together. But there was a backlash by Saudi clerics and conservative members of society.

Similar criticism was made when it organised its first Comic Con convention in February.

So perhaps the decision to make it male-only is a compromise which allows entertainment to thrive but avoids resistance by conservative groups.