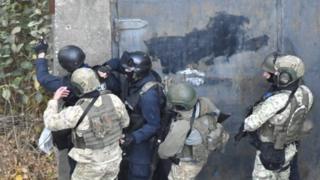 Explosions and gunfire have broken out in the Georgian capital Tbilisi as counter-terrorism forces lay siege to a block of flats where suspected militants are holed up.

The security service said several members of a "terrorist group" had refused to surrender and were firing and lobbing grenades from inside.

One member of the security forces is reported to have been seriously hurt.

Some accounts say those trapped inside the building are foreigners.

Others say they come from the Pankisi Gorge, a Georgian region with a large ethnic Chechen population, some of whom have joined jihadist groups in Syria.

An AFP reporter on the scene of Wednesday's skirmishes reported hearing multiple explosions and heavy gunfire in Tbilisi's Isani district, which has now been cordoned off by police.

One TV station broadcast footage of a burning flat in a multi-storey residential building surrounded by camouflaged soldiers and an armoured vehicle.

Security service spokeswoman Nino Giorgobiani said in a televised statement that one suspect had been arrested and a special operation was under way to catch several others.

She said that preliminary information suggested the suspects were not Georgian nationals but members of a "terrorist group".

"Investigation is under way both in Georgia and abroad to establish the suspects' criminal links," she said.

One report said that the wounded soldier had died during surgery.

Georgia has not had any jihadist-related incidents in recent years, correspondents say, but it is estimated that about 50 Georgians are fighting or have fought alongside the group known as Islamic State in Syria and Iraq.

IcetruckNovember 22, 2017
Like story:
tweet
Forest Service weighs changes to protections for sage grouse
‘A Killing on the Cape’: The Murder of Christa Worthington — Episode 5