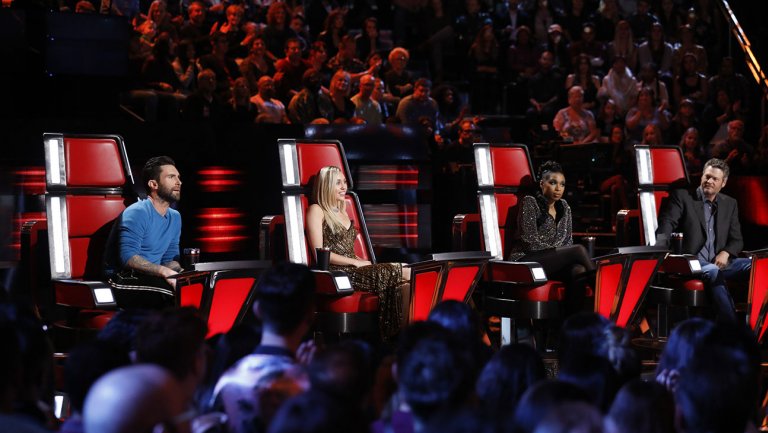 Two artists had to sing for the instant save for the first time this season.

The Voice delivered the results of Monday night’s top 12 performances, which viewers had the chance to vote on for the first time this season. Ten artists were automatically voted through to next week, and the bottom two vote-getters had to sing live for the instant save.

Coaches Adam Levine, Miley Cyrus, Jennifer Hudson and Blake Shelton were present to see which of their artists would be advancing to next week’s live performances. The first three artists voted through to next week were Team Adam’s Addison Agen, Team Jennifer’s Noah Mac and Team Blake’s Chloe Kohanski.

Hudson also took the stage tonight with her artists Mac, Davon Fleming and Shi’Ann Jones for a performance of “Let It Be.” Carson Daly brought the remaining nine artists to the stage to announce the next round of results. America voted to save Team Miley’s Brooke Simpson and Team Blake’s Keisha Renee.

Adam Levine took the stage with Maroon 5 for a performance for the first time this season. The next two artists through to next week’s performances were Team Jennifer’s Jones and Team Miley’s Janice Freeman. Shelton took the stage with his team for the first time this season, too. He sang “If It Will, It Will” along with his artists Kohanski, Red Marlow and Renee. The last three artists voted through to the top 11 were Team Jennifer’s Fleming, Team Team Miley’s Ashland Craft and Team Blake’s Marlow.

That left Team Adam’s Adam Cunningham and Jon Mero to sing live for the instant save. Cunningham went first, singing “Fortunate Son” by Creedence Clearwater. It was a high-pressure situation, but he gave a high-energy performance that showcased all his strengths. He got a standing ovation from all four coaches. Mero followed with a performance of “I Want You Back,” and he similarly did what he does best. He’s a very natural performer, and his vocals were more technically impressive than Cunningham’s.

Levine said they both proved that they should still be here, adding that he was not going to choose favorites. Cunningham secured the instant save, and Mero went home.

Tonight’s results did not bode well for Team Adam. The Voice season 13 continues with more live performances next week.

IcetruckNovember 22, 2017
Like story:
tweet
VA study shows parasite from Vietnam may be killing vets
‘This Is Us’ Star Chrissy Metz Opens Up About Kate’s Miscarriage