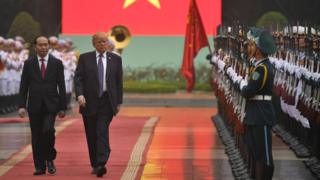 US military members had 'improper contact' with foreign women

Three members of the US military had improper contact with foreign women during President Trump's tour of Asia, US media report.

They have reportedly been reassigned from their jobs at the White House following the incident, which is said to have happened in Vietnam.

The Washington Post says the personnel worked for a unit that provides the White House with secure communications.

The Pentagon is investigating the incident.

The service members are alleged to have broken their curfew during the trip to Vietnam, which was part of the president's recent 12-day tour of Asia.

If the personnel are found guilty of having improper contact with foreign women they could lose their security clearances or face further disciplinary procedures.

Four other military personnel from the same unit, the White House Communications Agency, are currently under investigation for allegedly taking foreign women into a secure area during a trip to Panama in August.