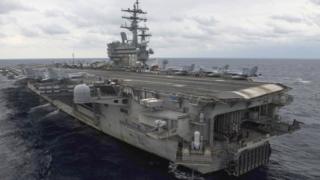 Eight people have been rescued after a US Navy aircraft carrying 11 crew and passengers crashed off the coast of Japan, the defence ministry has said.

It says that preliminary US military reports indicated that engine failure may have caused the crash.

The Navy did not say what kind of aircraft was involved, but Japan's Self-Defense Forces have said it was a C-2 transport aircraft.

The aircraft was travelling to a US aircraft carrier in the Philippine Sea.

Japanese and American rescuers raced to get to the stricken plane, which ditched in seas off the remote Japanese reef of Okinotori.

The crash follows a spate of US Navy accidents in East Asia in recent months, some fatal.

Ten personnel died in August, when the USS John McCain collided with a tanker near Singapore.

Two months earlier, in June, the USS Fitzgerald smashed into a cargo ship off the coast of Japan, killing seven.

In two other non-fatal incidents, the USS Antietam ran aground near its base in Japan in January, and in May USS Lake Champlain collided with a South Korean fishing vessel.

Japanese Defence Minister Itsunori Onodera said that his department had received an initial US report that engine trouble might have caused Wednesday's accident.

More than 60 different types of planes and helicopters operate from the USS Ronald Reagan, according to the carrier group's website, including fighters, early warning aircraft, electronic attack planes, transports planes and multi-purpose helicopters.

The US military is strongly deployed in the western Pacific, with tens of thousands of troops and billions of dollars' worth of hardware in the region.

The Ronald Reagan is one of three US aircraft carriers operating in the region alongside Japanese and South Korean warships, as tensions rise between the US and North Korea.