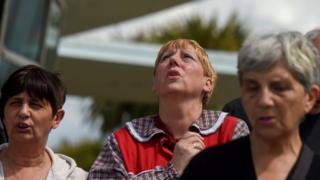 Argentina's navy is investigating reports of a loud noise detected a few hours after a submarine went missing.

The ARA San Juan disappeared last Wednesday with 44 people on board.

A spokesman called the noise a "hydro-acoustic anomaly" and would not confirm whether there had been an explosion.

Captain Enrique Balbi said the situation was getting critical and "concern is growing more and more" amid fears oxygen on board is close to running out.

One crew member's sister said: "I feel like I'm waiting for a corpse."

Elena Alfaro, who was waiting alongside other family members at the Mar del Plata naval base, told TN news network: "I feel like I'm at a wake. I also feel time passing and time is crucial."

More than a dozen countries including Russia and the US have sent resources to take part in the search for the submarine.

On Thursday, a US Navy aircraft detected an "object" near the submarine's last known location, the news agency Reuters reported, but the US Navy quickly confirmed that it was not from the missing sub.

On Wednesday, Mr Balbi told journalists: "Today is the seventh day, which was critical for oxygen capacity."

The loud noise happened four or five hours after the submarine's last radio contact, about 30 nautical miles (60 kilometres) north of its last-known position.

According to Mr Balbi, the captain of the ARA San Juan contacted the naval base once more after reporting the problem.

There was no mention by navy officials of the vessel having any problems at the time and rumours of a fire on board were dismissed by Mr Balbi.

On Monday, Capt Galeazzi confirmed the sub's captain had reported the issue on Wednesday.