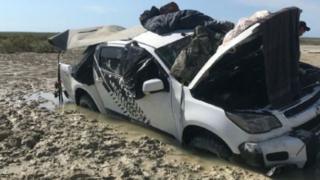 Two men stranded for five days in a remote part of Australia were forced to the roof of their bogged vehicle to avoid rising tides and even a crocodile, police say.

Charlie Williams, 19, and Beau Bryce-Morris, 37, were on a fishing trip with a dog in Western Australia on Friday when their car became stuck.

The pair made video messages during their ordeal, as a document and a message to their loved ones.

Rescuers found the men on Tuesday.

"They were very fatigued and dehydrated and heat-struck. Obviously quite emotional and happy to see us," said police Sgt Mark Balfour, the rescue co-ordinator.

He told the BBC the men had survived by rationing food and water, but they had run out of supplies when they were found on the Dampier Peninsula, about 100km (60 miles) north of the city of Broome.

Sgt Balfour said the men had encountered at least one crocodile, which left them fearful.

In the videos, published by local media outlets, Mr Bryce-Morris said: "We were surrounded by crocodiles last night – tried to attack my dog."

He went on to say the pair were staying positive, and later named a few people to whom he was sending love.

"No one can find us. Can hear planes every now and again. You don't know how disheartening it is when [they] fly off," he said.

"Hopefully someone will come and get us."

Police began their search on Tuesday after relatives noticed the men had not returned. They were found later that day.

Sgt Balfour said the area was "in the middle of nowhere" and renowned for large tides.