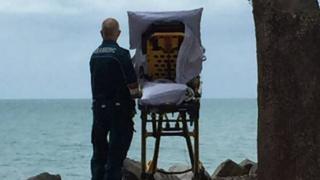 A terminally ill woman in Australia has been granted her final wish to go to the beach by paramedics in Queensland.

The moment which was shared on social media by the Queensland Ambulance Service shows a paramedic standing beside the woman in her hospital bed.

The pair are seen looking out at the water at Hervey Bay, a coastal city in southern Queensland.

Hervey Bay officer-in-charge Helen Donaldson said a crew was transporting a patient to the palliative care unit of the local hospital when the woman expressed how she wished she could "just be at the beach" instead.

"Above and beyond, the crew took a small diversion to the awesome beach at Hervey Bay to give the patient this opportunity. Tears were shed and the patient felt very happy" she posted.

"Sometimes it is not the drugs, training, skills – sometimes all you need is empathy to make a difference!"

"Beautiful, I got goosebumps. Thank you for sharing," read one reply.

On Twitter there was a similar reaction when the story was tweeted by Kate Kyriacou, a reporter at the Brisbane based newspaper The Courier-Mail.

"What a lovely thing to do. The end comes to us all. At that point the smallest things are the most important," posted one Twitter user in response.

Jo Lorimer posted in support of the ambulance services across Australia: "A very close friend was getting married. On the day of her wedding her mother collapsed as she had terminal cancer. Instead of the ambulance taking her to hospital they went to the church and wheeled her into the church on a stretcher.

"She watched her daughter get married, she died a few days later."

IcetruckNovember 23, 2017
Like story:
tweet
Argentina missing submarine: Loud noise investigated
ANALYSIS: Health care should be a right, but the US doesn’t have a ‘system’