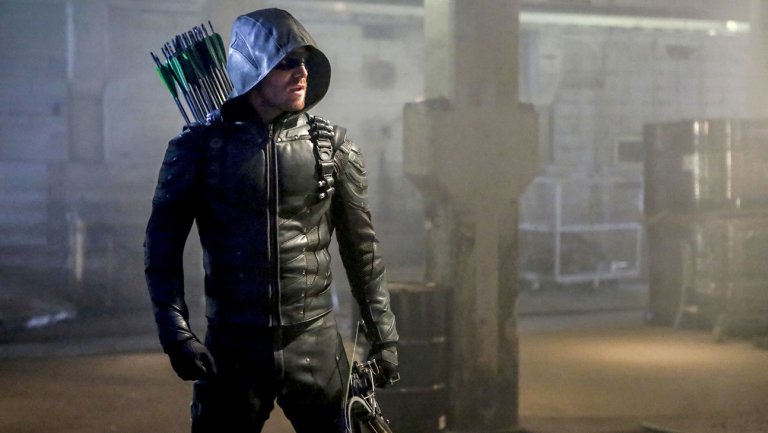 THR rounds up the major twists, new mysteries and more announcements for all the DC Comics TV shows.

Welcome back to The Hollywood Reporter's weekly DC TV Watch, a rundown of all things DC Comics on TV. Every Friday, we round up the major twists, epic fights, new mysteries and anything else that goes down on The CW's Arrow, The Flash, Legends of Tomorrow, Supergirl and Black Lightning, and Fox's Gotham.

[Editor's note: THR will continue to cover the onscreen events of the DC TV series as producers Warner Bros. Television investigate Arrow, Supergirl, Legends and The Flash executive producer Andrew Kreisberg, who has been suspended following multiple allegations of sexual harassment. Here is how the stars responded to the allegations.]

Something to be grateful for | Usually when comic book shows try to celebrate any kind of holiday or momentous occasion, shit hits the fan real quick. So when Arrow decided to not only air a new episode on Thanksgiving but also have the characters try to celebrate the holiday onscreen, it was pretty much a given that things were not going to go smoothly. Diggle (David Ramsey) ended up going through withdrawals from the drug he was taking to hide his injury, so Oliver (Stephen Amell) was forced to suit back up as Green Arrow. He then had to lie to his son Wiilliam (Jack Moore) about it, and even made Diggle lie to William for him. Oliver was also arrested as the Green Arrow by the FBI, and they claim to have hard evidence linking him to murders, so that's going to trial. Plus the anti-vigilante law passed after some meddling by Cayden James (Michael Emerson), and the whole city has turned against Team Arrow. But at least one good thing did come out of the episode, making it a very happy Thanksgiving indeed for everyone: Thea (Willa Holland) woke up from her coma. She's been out of commission all season after suffering sever injuries from the Lian Yu explosion, but she was awake, alert and talking and joking with Oliver like she had just woken up from a long nap. She even got to have Thanksgiving dinner with Oliver, Felicity (Emily Bett Rickards), Diggle and William like one big family. Hopefully this is a sign of more good things to come for her character.

Too many coincidences | After time anachronisms forced Ray (Brandon Routh) to meet his younger self, Stein (Victor Garber) to meet his evil ancestor, and now Mick (Dominic Purcell) has had to face a younger version of his father, something is starting to add up to more than just coincidence. Why do all the time anachronisms that the Legends have had to face always connect with someone from their past? Is there more to these errors in the timeline than meets the eye? And why is Ray the only one who seems concerned by that fact?

Time travel is so easy that even a monkey could do it | Not sure how this one is going to play out, but it won't be good: Damien Darhk (Neil McDonough) saved Gorilla Grodd from dying in a fire in the Vietnam War, only to bring him to the present and give him a device that allows the giant gorilla to time travel with a single thought. So yeah, on top of everything else, now the Legends have to worry about a time traveling psychic angry giant gorilla. Oops.

Mrs. Mon-El | Despite Mon-El's (Chris Wood) miraculous return to National City, his reunion with Kara (Melissa Benoist) wasn't as romantic as she hoped it would be. As she finds out once he started opening up to her, he was sucked into a wormhole and popped out into the future after leaving Earth, and it's been seven years for him since he last saw Kara, even though it's only been seven months for her. He kept on living, met Imra Ardeen (Amy Jackson), aka Saturn Girl, and as Kara found out at the end of the episode when she woke up and kissed him right in front of Kara, they were married. Talk about an awkward way to meet your ex's wife. And while the mystery surrounding Mon-El's reappearance played well in this episode, having to wait another two weeks (as the crossover airs next week) to finally get into the Legion mythology is going to be tough. This tiny taste of Saturn Girl and the Legion ship buried underneath National City was not enough!

Reign is born | In a storyline reminiscent of Smallville in more ways than one, Sam (Odette Annable) has officially transformed into the villain Reign (although she hasn't suited up just yet). After getting to the bottom of her origin story with her estranged adopted mother, Sam used a crystal from her spaceship that her mother hid in a barn to build her own Fortress of Sanctuary, a black and sinister twist on Kara and Clark's (Tyler Hoechlin) Fortress of Solitude. But after a hologram told Sam she was meant to be a Worldkiller, unfortunately Supergirl didn't take time to dwell on Sam's reaction. Instead, something inside the Fortress essentially took over Sam's mind and made her a hollow vessel for the Worldkiller persona to come forth. It's a shame the show didn't take its time to let Sam evolve and become Reign naturally. Wiping her mind and uploading a new, evil personality makes it hard to empathize and understand her choices moving forward. Hopefully Sam will try to wrestle back control over her body and mind over the next few episodes. Watching that struggle would be a much more compelling arc than a new, robotic person just replacing the single mom.

A fortuitous meeting | The Flash finally gave viewers The Thinker's (Neil Sandilands) origin story via flashbacks, and while his descent into villain-dom was fascinating to watch, it was a chance encounter in the past that was the best part of the episode. The night of the particle accelerator explosion back in the pilot, The Thinker aka Clifford DeVoe took his "thinking cap" invention to STAR Labs, intending to use the energy exerted to power it on. During Harrison Wells' (Tom Cavanagh) welcome speech (part of which was shown in the pilot but was expanded on in this episode), Wells noticed DeVoe in the crowd and clearly recognized his name. He seemed awed and a little entertained at the thought of meeting DeVoe, laughing to himself like some kind of a private joke … because, as fans remember, that's not actually Harrison Wells. Back in season one, that was Eobard Thawne (Matt Letscher) aka the Reverse-Flash posing as Wells, and being from the future and Barry's (Grant Gustin) nemesis, Thawne would know all about another one of The Flash's greatest past rivals, The Thinker. That subtle nod was clever (and worked only because it wasn't spelled out for viewers), and something Barry missed entirely since he ran off to try and stop Iris' (Candice Patton) mugger from stealing her laptop. If only Barry had stayed for 30 seconds longer, he would have had a lot more information about his present foe. At least he and the rest of the STAR Labs team now know for sure DeVoe is The Thinker, since he outed himself to Barry by the end of the hour. The fact that DeVoe is not even concerned with revealing his identity and origins to Barry is pretty downright terrifying. He's so far ahead of everyone else and Barry only just realized the game is being played.

Gotham airs Thursdays on Fox. Supergirl airs Mondays, The Flash and Legends of Tomorrow air Tuesdays, Arrow airs Thursdays; and Black Lightning will premiere Tuesday, Jan. 16, all on The CW.