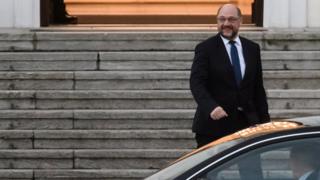 Germany's Social Democrats are under pressure to reconsider an alliance with Chancellor Angela Merkel's conservatives and form a coalition government.

Mr Schulz has refused to enter into a coalition with the Christian Democrats.

The deadlock follows the collapse of talks between the Christian Democrats, the Free Democrats and the Greens.

Some members of the centre-left SPD are calling on Mr Schulz to change his mind and form a "grand coalition" with the conservative CDU/CSU bloc.

The leader of the party's conservative wing, lawmaker Johannes Kahrs, had urged Mr Schulz to keep an open mind during the talks with Mr Steinmeier, Bild newspaper reported.

The SPD, which had governed with Mrs Merkel since 2013, said it would go into opposition following the 24 September election, when the party had its worst election result since 1949.

Germany has been without a stable government since the vote produced no overall majority.

Mr Steinmeier is meeting the leaders of the political parties separately this week in efforts to break the stalemate and avoid a snap election.

There were mixed signs from the pro-business FDP after its leader insisted that his party – which pulled out of coalition talks with Ms Merkel on Sunday – would not be part of a new government.

That came after a top party official said there was still the possibility of further talks on a coalition government if new proposals were introduced.

Until a government is agreed, Ms Merkel continues as acting chancellor and previous ministers remain in post, while the German parliament sits as normal.