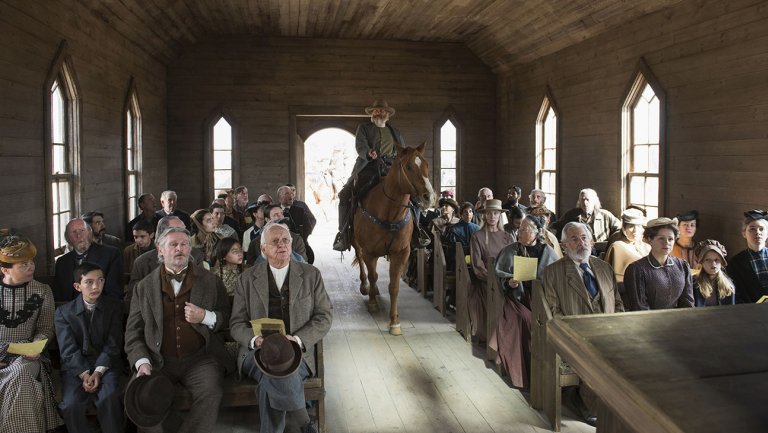 'Godless' Team on Expanding Netflix's Limited Series Beyond One Season

Westerns are making a comeback with the help of Netflix’s latest original limited series Godless.

A number of series that begin as limited engagements have expanded with multiple seasons. Shows including Netflix's 13 Reasons Why and AMC's The Night Manager began as limited series, though both have been renewed for following seasons. HBO's Big Little Lies is another limited series that is regularly rumored to be coming back for a second cycle.

When asked whether Godless could fall in that category if the Jeff Daniels-starrer is positively received, many of the castmembers said they believed the show should remain a limited engagement. “I think it’s a novel,” Sam Waterston, who plays Marshal John Cook, told The Hollywood Reporter at Sunday's New York City premiere at The Metrograph. “I don’t think they’ll make a Godless 2.”

His co-star Thomas Brodie-Sangster agreed. “It’s got a really nice beginning, middle and end. It’s very popular now-a-days to just make something go on and on and on. At some point, it becomes some sort of money-maker thing and I think as a viewer you can see that and sense that,” said the actor, who plays Deputy Whitey Winn. “For me, unless they do something amazing with the writing and as long as it’s appropriate, I think it’s nice to actually have a Netflix show that comes out like this where you have the beginning, middle and end.”

Director, writer and executive producer Scott Frank added that he had not thought of any storylines that could follow season one of Godless. “You never know, but right now I don’t know what it would be,” he said.

The series follows notorious criminal Frank Griffin (Jeff Daniels) and his gang of fellow outlaws as they seek revenge from his former son-like figure Roy Goode (Jack O’Connell). Roy finds help in the form of recent widower Alice Fletcher (Michelle Dockery), who resides in the female dominated town of Le Belle, New Mexico, that recently lost many husbands and fathers due to a horrific accident.

“You start just by playing a guy who’s a father who lost his son, or whose son, at least in his mind, has betrayed him. So it becomes a father-son story,” Daniels said of how he prepared for the role. “As far as what Frank Griffin is made of, I mean the guy needs a shrink. He needs a team of shrinks and they weren’t available in the 1880s.”

Many of the actors found inspiration from a variety of different outlets to play their roles. Dockery credits "Cowboy Camp” for helping her get into character, which taught castmembers skills like how to shoot a gun. “That’s something I’ve never done before. I was intimidated and terrified actually when I picked up the rifle for the first time,” she said. “Also, horse riding in a very different way than I have before. Western riding is very different.”

Samantha Soule, who plays Charlotte Temple, watched classic Western films to prepare for the role. McCabe and Mrs. Miller and High Plains Drifter were just two of the films she studied for inspiration. “It was such an excuse to really just binge watch,” she said.

When asked if he turned to any Western films to gain inspiration, Brodie-Sangster stated, “I planned to and it never happened. I think that’s because of the writing. Everything was very much there and the characters were all very well thought about,” he explained. “Production has kind of been in the mind of Scott Frank for a long time and everything was all there and ready to go. I walked onto set and I didn’t feel I had do to a huge amount of research.”

Veteran actor Waterston mentioned that his past work in the genre made it easy for him to get into character. “I did Heaven’s Gate and Rancho Deluxe, so this is not my first rodeo,” he said.

Merritt Wever, who plays Mary Agnes, credits “pictures of women fighting in Barcelona to fight the fascists” during the Spanish Civil War for helping her find inspiration for the character. She continued, “For some reason even though those aren’t of the same time period, I found them somewhat inspiring and informative.”

Godless has been making a name for itself as a feminist Western among a number of critics. “It was written long ago and I think it’s sort of an accidental feminist Western more than anything else,” said Frank.

“It’s ultimately a story about people. Of course it’s a story that hasn’t been told before,” said Dockery on whether or not she considers the show a feminist statement. “It has all of the classic elements of a Western, but these towns in which were solely made out of women were common in those times and it’s something that people have never seen before in a story, particularly in a Western.” She added, “The women unite to fight against Frank Griffin and it really turns the Western genre on its head.”

Godless is streaming now on Netflix.