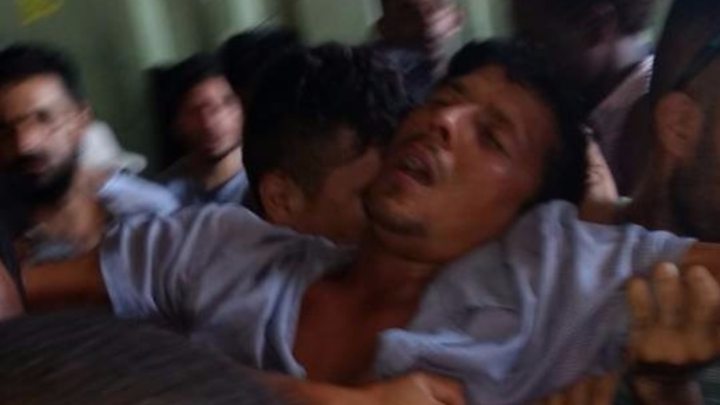 Police in Papua New Guinea (PNG) have moved about 40 refugees and asylum seekers from a former Australian-run detention centre on Manus Island.

But more than 300 others remain. They have been refusing to leave since the camp was shut on 31 October, saying they fear attacks from local people.

Police moved in on Thursday and ordered the men to leave the camp. One refugee, a journalist, was briefly detained.

The PNG authorities have cut food, water and electricity and have told the remaining men they are squatters on defence force property.

Meanwhile, the UN refugee agency (UNHCR) called on both Papua New Guinea and Australia to "engage in constructive dialogue, to de-escalate the tensions", according to Reuters.

Australia's Prime Minister Malcolm Turnbull said his nation would "not be pressured" into accepting the men, reiterating a long-held policy that such a move would encourage human trafficking.

One refugee, Abdul Aziz Adam, said about 420 asylum seekers were in the centre early on Thursday.

The Sudanese refugee told the BBC a large number of police officers had entered the compound.

Another refugee, Iranian reporter Behrouz Boochani, was briefly detained. His arrest was described by Australia's journalism union, the Media, Entertainment and Arts Alliance, as an "egregious attack on press freedom".

A video and a separate photo appeared to show Mr Boochani being led away by officers.

They are looking for me and Behrouz they found him but they are not going to find me. These are police are taking Behrouz. pic.twitter.com/G01bA46ETC

The journalist, a prominent voice within the centre, later tweeted that he had been "handcuffed" for more than two hours and had his belongings broken.

In another tweet, he wrote that "police beat up some of the refugees and forced them to the new prison camp in East Lorengau, Hillside Haus and West Haus".

Many of the asylum seekers have refused to leave because of safety fears on the island, where there is tension between them and the local community. Asylum seekers have been attacked in the past, rights groups say.

Earlier, Mr Boochani tweeted that an Australian police officer appeared to be "guiding" some local officers. This was denied by Australian Federal Police, who said they had no involvement in the operation.

Australia has repeatedly said that alternative accommodation for the asylum seekers is ready.

However, the UN's refugee agency said on Tuesday that housing remained "under construction", was inadequately secured, and lacked "the most basic services" such as medical care.