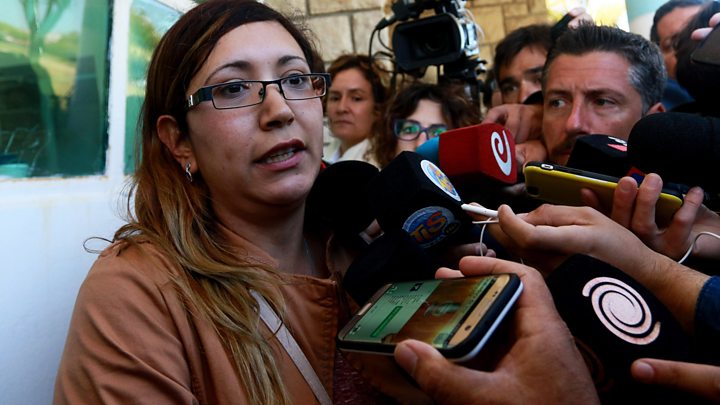 Hopes that the 44 crew of a missing Argentine submarine might still be alive have been dashed after the navy said an event consistent with an explosion had been detected.

The "abnormal, singular, short, violent, non-nuclear event" was recorded in the south Atlantic by a nuclear test watchdog last week.

Relatives of the missing crew reacted with grief and anger at the news.

It follows a US report of a loud noise in the same area.

The ARA San Juan disappeared last Wednesday. More than a dozen countries including the US, Russia and the UK have sent assistance.

Where is the latest information from?

It was provided to the Argentine navy on Thursday by the Vienna-based Comprehensive Nuclear-Test-Ban Treaty Organization (CTBTO), spokesman Capt Enrique Balbi said.

In a statement, the CTBTO said two of its hydro-acoustic stations had detected a signal from an "underwater impulsive event".

On Wednesday the navy received a US report of a "hydro-acoustic anomaly" detected hours after the submarine went missing.

The navy only knew the location of the suspected explosion, not its cause, he said, and search efforts would be concentrated in the area.

How have relatives reacted?

News of the suspected explosion was broken to family members gathered at the Mar del Plata navy base shortly before Capt Balbi spoke to journalists.

Some remonstrated angrily with the navy spokesman, reports said, while others collapsed in tears.

Relatives accused the navy of lying to them and of raising false hopes. Others pointed the finger at the government, saying lack of investment and corruption in the armed forces had made the submarine unsafe.

Luis Tagliapietra, whose son Damián was on board, told Radio Cut that the navy had told them all the crew had been killed in the explosion at a depth of 200m.

On Wednesday, Capt Balbi said oxygen would be running out on board the vessel.

How could the missing submarine be located?