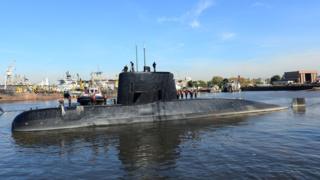 The Argentine navy says an event consistent with an explosion was recorded near where a submarine disappeared last week with 44 crew on board.

An "abnormal, singular, short, violent, non-nuclear event" had been detected in the south Atlantic, a spokesman said.

It follows a report of a loud noise in the same area.

The ARA San Juan disappeared last Wednesday. More than a dozen countries including Russia and the US have sent assistance.

The new information was provided to the Argentine navy on Thursday by the Vienna-based Comprehensive Nuclear-Test-Ban Treaty Organization (CTBTO), Capt Balbi said.

In a statement, the CTBTO said two of its hydro-acoustic stations had detected a signal from an "underwater impulsive event".

On Wednesday the navy received a US report of a "hydro-acoustic anomaly" detected hours after the submarine went missing.

The navy only knew the location of the suspected explosion, not its cause, he said.

Search efforts would be concentrated in the area, he said.

On Wednesday, Capt Balbi said oxygen would be running out on board the vessel.

Relatives have been waiting for news outside the Mar del Plata naval base, south of the capital Buenos Aires.

One crew member's sister said: "I feel like I'm waiting for a corpse."

There was no mention by navy officials of the vessel having any problems at the time and rumours of a fire on board were dismissed by Capt Balbi.