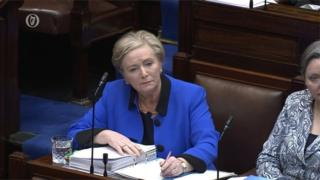 Ireland's minority government is in crisis as a controversy surrounds its deputy prime minister.

The main opposition party, Fianna Fáil, has indicated that it will put forward a motion of no confidence in the deputy prime minister Frances Fitzgerald.

A formal motion on the issue is yet to be presented by Fianna Fáil, however.

The controversy concerns Ms Fitzgerald's handling of a police whistleblower controversy when she was justice minister.

He said Ms Fitzgerald "should go" and that the recent events regarding the situation had undermined the confidence and supply agreement between the Fine Gael minority government, led by Mr Varadkar and the main opposition Fianna Fáil.

On Thursday, Sinn Féin tabled a motion of no confidence in Ms Fitzgerald.

Fine Gael ministers have rallied to her defence.

"What we have here are calls for her resignation that are built on sand. We are still not fully sure what she has been accused of."

The motion of no confidence in Ms Fitzgerald is to be debated and voted on next Wednesday.

The Irish deputy prime minister has recently admitted that she was made aware a year earlier than she had previously stated, that lawyers for the Garda were going to attempt to discredit Sgt Maurice McCabe.

The Disclosures Tribunal is investigating, amongst other matters, whether former Garda commissioners Noirín O'Sullivan and Martin Callinan were involved in an attempt to smear Sgt McCabe with the false allegation that he was a child-sex abuser.

The email was initially sent to Ms Fitzgerald in May 2015, but she told the Dáil (parliament) earlier this week that she could not remember reading it.

Ms Fitzgerald faced further questions in the Dáil on Thursday, but said there was no attempt by her or anyone else to cover up the email at the centre of the row.

Sinn Féin deputy leader Mary Lou McDonald said after a week of discussion, speculation and questions the tánaiste had not given any satisfactory explanation.

Speaking to Irish national broadcaster RTÉ, she said Ms Fitzgerald "has clearly failed in her duties" when she learned the Garda strategy "was so utterly malicious and designed to… ruin Sgt McCabe's life".

Under the terms of a confidence and supply arrangement between the governing party Fine Gael and the main opposition party Fianna Fáil, the latter has agreed not to vote against the minority government in confidence motions and to support it in three budgets, two of which are now past.