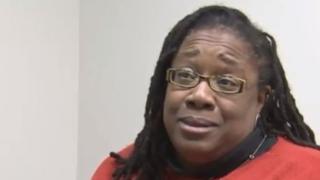 A mother in the US who equipped her daughter with a hidden digital recorder at school to catch alleged incidents of bullying has been charged by police and faces five years in jail.

Sarah Sims is accused of wrongfully using the device to intercept oral communication.

She is also accused of "contributing towards the delinquency of a minor".

She said she took the action because her daughter's school did not address her repeated complaints about bullying.

"If I'm not getting an answer from [the school] what am I left to do?" she asked Wavy.com in relation to the sustained bullying she says her nine-year-old daughter experienced at the school in Norfolk, Virginia.

Ms Sims said she hid the recording device in her daughter's backpack in September to prove that no effort was being made to help her.

The school has not commented on the case, but a spokesperson for the Norfolk Public School District made clear that electronic devices are not allowed in elementary schools.

The district has stringent anti-bullying rules on its website, with parents and children alike encouraged to report incidents.

Ms Sims said that she was "mortified" to hear that she had been charged for "trying to look out for my kid". She faces a possible five years in jail for a felony charge and 12 months for a misdemeanour allegation.

Her lawyers say they do not expect proceedings against her to progress in the courts.

A preliminary hearing for her case is initially scheduled for 18 January.