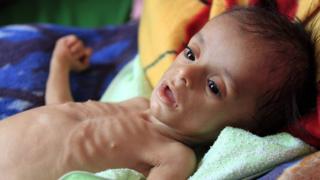 Humanitarian groups are waiting to see if aid flights and shipments to rebel-held Yemen can resume after a Saudi-led coalition eased its blockade.

UN Humanitarian Co-ordinator Jamie McGoldrick told the BBC that he hoped to receive clearance within hours.

The coalition closed Yemen's borders two weeks ago after rebels fired a missile at the Saudi capital, Riyadh.

But the UN warned the restrictions could trigger "the largest famine the world has seen for many decades".

Yemen is reliant on imports for more than 80% of its food, and it faced the largest food security emergency in the world even before the blockade was tightened.

The coalition announced the "temporary closure" of Yemen's air, land and sea borders on 6 November, two days after a ballistic missile fired from territory held by the rebel Houthi movement was intercepted over Riyadh's international airport.

Although the coalition said it would continue to allow humanitarian aid into Yemen, it was seven days before government-controlled ports reopened.

On Wednesday, the coalition announced it had carried out a review of the UN's inspection and verification procedures of aid shipments aimed at preventing the alleged smuggling of weapons to rebel-controlled facilities.

But by Thursday afternoon there had been no reports of any aid arriving.

"There is a system where we notify [the coalition] and ask for space or time slots to bring our planes in, and we negotiate in terms of getting space on the port as well," Mr McGoldrick told the BBC.

"We've actually gone through the normal procedures and we're just waiting to find out how that goes," he added. "Around 19:00 this evening we expect to hear something one way or another."

On Wednesday, the UN said it had 145 tonnes of humanitarian cargo waiting at a port in Djibouti, and 18 tonnes of relief items ready to be airlifted..

Though the reopening of ports will ease the flow of aid, it will still leave the people of Yemen in a worse situation than they were before the blockade. If shipments of food & fuel are not resumed immediately this action will do little to turn Yemen back from the brink of famine

The International Committee of the Red Cross (ICRC) said it was also not expecting any flights on Thursday.

Spokeswoman Iolanda Jaquemet said the coalition's decision to reopen rebel-held air and sea ports for humanitarian and relief efforts was a "positive move", but added that it was also "very concerned about the resumption of trade into Yemen".

"Aid alone is not sufficient to provide for the essential needs of 27 million Yemenis, who will need more than that to survive the crisis and ward off famine," she warned.

Last week, three UN agencies said "untold thousands of innocent victims" would die unless the delivery of life-saving supplies to all rebel-held ports was permitted.

More than 20 million people, including 11 million children, are in need of urgent humanitarian assistance. Some 17 million people do not know where their next meal is coming from and seven million are totally dependent on food assistance. Severe acute malnutrition is threatening the lives of almost 400,000 children.

At least 14.8 million are without basic healthcare and the world's largest cholera outbreak has resulted in more than 913,000 suspected cases and 2,196 deaths.

Fighting on the ground and air strikes have also killed more than 8,670 people and injured 49,960 others since the coalition intervened in the war between forces loyal to President Abdrabbuh Mansour Hadi and the Houthis in 2015, the UN says.