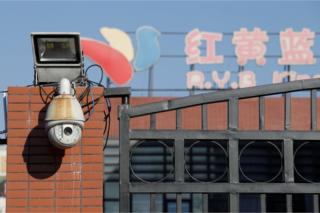 A Beijing nursery is accused of giving injections and feeding drugs to toddlers, in a case that has sparked outrage in China.

Authorities are now investigating the nursery, which is a branch of the well-known RYB Education chain.

The company says it "deeply apologises" for the matter that has caused "severe disquiet".

Beijing officials are also conducting a security check in all nurseries in the Chinese capital.

The incident comes weeks after a Shanghai childcare centre was alleged to have abused several toddlers.

At least eight children attending the RYB Education pre-school in the upscale Chaoyang district are said to have been injected with unknown substances.

They also said their children were fed pills or syrup before their naptime. One father told state broadcaster CCTV that his child had said that every day after lunch they would be given two white pills, and "go to sleep" after eating the pills.

On Thursday, several parents gathered outside the kindergarten to protest. Some told Caixin Global that they suspected teachers had used needles to discipline children.

"Disobedient students were also forced to stand naked or were locked up in a dark room at the kindergarten," one parent told the news portal.

Police have seized CCTV footage at the nursery, and three teachers have also been suspended.

The Beijing Municipal Commission of Education said that a "comprehensive security check" was being conducted in all nurseries in Beijing.

RYB Education issued a statement on Thursday (in Chinese) saying it was co-operating with police and added: "We deeply apologise for this matter which has brought severe disquiet to parents and society!"

It also said: "If any wrongdoing is found, we will not shake off the responsibility. And we have also reported to the police some false accusations against us."

The company is one of China's most well-known early childhood education providers, and was listed on the New York Stock Exchange in September.

The case has sparked an intense outcry and reignited anxieties over childcare standards in China, which has seen other cases of abuse at nurseries in recent years.

Last year four teachers at a RYB nursery in Jilin province were jailed for abuse, also involving giving injections to children. State news agency Xinhua reported at the time that one child was found to have more than 50 needle marks.

Mainstream media have extensively covered the latest Beijing case, which has drawn tens of thousands of comments on microblogging network Sina Weibo.

Most expressed outrage at the nursery and education authorities, and demanded fuller explanations as well as heavier punishments for the teachers. "Suspension? That's just too easy," said one commenter, while another said: "Don't let these beasts harm anyone else!"

Many also claimed that some online discussion was being scrubbed. A check on FreeWeibo, a website which tracks censorship on the network, found the top censored search was "Honghuanglan", RYB Education's Chinese name.

"The authorities are covering things up, and have an attitude where they do not directly answer questions. After this, no matter what kind of explanations they give, it will be hard to believe them. They are losing public trust step by step!" said one commenter.

An issue with explosive potential

A storm of social media attention came after a crowd of angry Beijing parents gathered outside the kindergarten.

There are reports that police have already confirmed that the marks on the children are consistent with needle punctures.

Realising the explosive potential for this issue to spread, the Beijing education authorities have been quick to announce a full safety check of all kindergartens under its control.

Shock over the allegations follows an investigation last month into bruised children at a kindergarten in Wuhan, Hubei province and another scandal in Shanghai, also in November this year, after a video was released appearing to show kindergarten children being assaulted and injured by teachers.