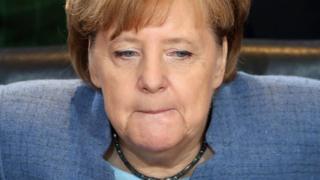 Germany's centre-left Social Democrats say they are open to talks with other parties to try to end the stalemate, after Chancellor Angela Merkel failed to form a coalition government.

SPD leader Martin Schulz had refused to form a coalition with Mrs Merkel's conservatives and said the party would go into opposition.

But he is under pressure to reconsider an alliance amid the political impasse.

The announcement makes it less likely that a snap election will be needed.

"The SPD will not say no to discussions," SPD General Secretary Hubertus Heil said after eight hours of late-night talks between top SPD politicians.

However, he did not say which parties the SPD would negotiate with, nor if they would join another "grand coalition" led by Mrs Merkel's Christian Democrats (CDU) and their Christian Social Union (CSU) allies.

The SPD was in government with Mrs Merkel in 2013-2017 and said it would not renew the deal following the 24 September election, when the party had its worst election result since 1949.

Earlier on Thursday Mr Schulz met President Frank-Walter Steinmeier, who is holding talks with party leaders, in an effort to broker a new coalition deal and avoid an early election.

Germany has been without a stable government since the election produced no overall majority. Negotiations for a coalition between the CDU/CSU, the liberal Free Democrats and the Greens collapsed this week.

Until a government is agreed, Mrs Merkel continues as acting chancellor and previous ministers remain in post, while the German parliament sits as normal.