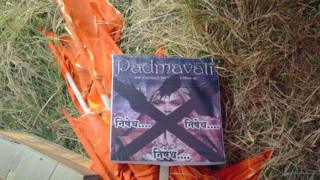 A body has been found hanging outside a fort in the northern state of Rajasthan along with a warning note that mentions controversial Indian film Padmavati.

Police told BBC Hindi that they were investigating to determine whether it was a suicide or murder.

"We don't burn effigies, we hang," the note reads. It's not clear if the note is against or in support of the film.

Police inspector Ramkishan Bishnoi said the body was found near the Nahargarh fort in the state capital, Jaipur.

"We are investigating every possible angle of the case," he said.

The latest incident coincides with protests against the film in many parts of the country.

The crew had faced violent protests during the filming of Padmavati near the same fort earlier this year. The director, Sanjay Leela Bhansali, was also slapped by an angry protestor.

Hindu groups say the film has a scene showing a dream sequence where a Muslim king romances the Hindu queen Padmavati.

Mr Bhansali has repeatedly denied that such a scene exists. But protests have continued and some states, including Rajasthan and the central state of Madhya Pradesh, have said they won't allow the film's screening in theatres.

Rajasthan Chief Minister Vasundhara Raje has said the film should not be released until "necessary changes are made so that sentiments of any community are not hurt".

The film Padmavati tells the story of a 14th-Century Hindu queen belonging to the high Rajput caste and the Muslim ruler Alauddin Khilji.