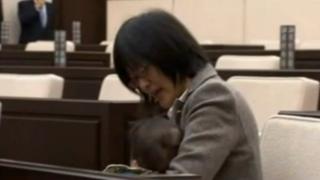 A local Japanese politician has been criticised by lawmakers for trying to bring her baby to a council session.

Yuka Ogata said she wanted to show how difficult it is for women to juggle careers and raise children.

Kumamoto municipal assembly officials said she had violated assembly rules as visitors and observers are forbidden from the floor.

After a lengthy discussion, Ms Ogata left the child with a friend and the session started 40 minutes late.

The council says it will discuss her case and ways to support lawmakers with young children.

Speaker Yoshitomo Sawada told reporters: "We would like to work on a system where assembly members can participate in meetings with their children," Mainichi newspaper reports.

Wednesday's incident was the first time Ms Ogata had attended a municipal assembly plenary session since giving birth to her son seven months ago.

She told reporters that she had asked the secretariat repeatedly to either allow her son to be with her during the assemblies or to provide a day-care facility.

"I wanted the assembly to be a place where women who are raising children can also do a great job," she told Mainichi.

She said she received no positive response, but decided to simply bring her child anyway.

Meanwhile, the council secretariat told Asahi Shimbun newspaper that Ms Ogata had only expressed her "anxiety about being separated from the child for a long time" but had not actually requested to bring her child to the plenary session.

While there is no explicit rule against bringing infants, assembly rules forbid visitors or observers from being present on the floor when a meeting is in session.

Japan is a country with very traditional gender roles and many women chose to abandon their careers once they get married and have children.

The government of Prime Minister Shinzo Abe has for years been trying to make it easier for mothers to continue working after giving birth but despite these efforts, the country's gender gap remains wide.