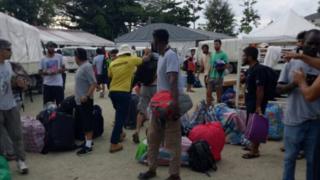 Asylum seekers who refused to leave a former Australian-run detention centre in Papua New Guinea (PNG) have been moved to new housing after a three-week stand-off, Canberra has confirmed.

The group had resisted leaving the Manus Island camp after it shut on 31 October, fearing attacks by locals.

Buses carrying about 300 asylum seekers left the centre on Friday after police entered the facility for a second day.

Some detainees claimed they were struck with poles by PNG police.

Australia's Immigration Minister Peter Dutton said that claims of violence were "inaccurate and exaggerated". Australian police said they were not involved in the operation.

Why are the asylum seekers on Manus Island?

Under a controversial policy, Australia has detained asylum seekers arriving by boat in centres on Manus Island and Nauru, a small Pacific nation.

The government has said the detainees will never settle in Australia, arguing such a move would encourage human trafficking and prompt deaths at sea.

The Manus Island centre, which held only men, was shut down by Australia after a PNG court ruled it was unconstitutional. A majority of the men still there are refugees, the UN says.

Why did they refuse to leave the centre?

About 600 asylum seekers and refugees initially refused to leave the camp, arguing they were unsafe in the local community – where their presence is a cause of tension.

Human Rights Watch has said the men could face "unchecked violence" after being attacked in the past with rocks and knives.

About 300 men left the centre before Friday, after enduring squalid conditions and pressure from authorities. Electricity, food and water was cut at the centre when it closed.

Were they forcibly removed?

Video on social media showed PNG authorities swinging poles towards asylum seekers on Friday, in what some of the men described as beatings.

"They [the asylum seekers] don't like to move but then they beat us," one refugee told the BBC on Friday.

Mr Dutton rejected such claims, saying that reports violence and injuries were "inaccurate and exaggerated".

Earlier, PNG police commissioner Gari Baki said that the police operation was being conducted "peacefully and without the use of force"

Where are the men now?

They were moved by buses to three transit centres elsewhere on Manus Island. The sites are secure and provide food and medical services, according to Australia.

However, that claim has been repeatedly contradicted by the UN's refugee agency. On Tuesday, a representative said the housing remained "under construction", was inadequately secured, and lacked sufficient medical and welfare care.

Mr Dutton said on Friday that some equipment, including generators, had been "sabotaged" at the transit centres.

The stand-off is over, but there's still no real resolution to the situation on Manus Island.

Some of the refugees moved today are still hoping an agreement with the US will eventually see them resettled abroad.

But it's now a year since that deal was struck and progress has been slow, with only a few dozen people accepted so far.

Even if Australia is right about the transit centre facilities, refugees and asylum seekers do not know how long they will stay there – or what their final destination will become.

Where could they go?

The US has agreed to take up to 1,250 refugees from Manus Island and Nauru. However, it may ultimately accept fewer than that.

The agreement, which is being administered under the UNHCR, is prioritising women, children and families and other refugees found to be the most vulnerable.

New Zealand has offered to take 150 refugees from the PNG centre, but Canberra has rebuffed this proposal – arguing it would effectively be a "back door" to Australia.

Last month, Australia and PNG each said the other was responsible for the asylum seekers in the meantime.

Did the detention centre cause controversy?

Yes. Six asylum seekers have died on Manus Island since the facility was re-opened in 2012, including Iranian man Reza Barati who was murdered during a riot.