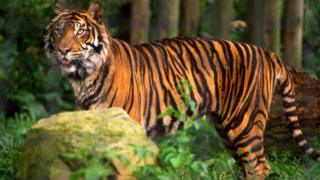 A tiger broke out of a circus in central Paris and roamed streets just south of the Eiffel Tower before its circus handlers shot and killed it.

Police tweeted that the tiger had gone on the loose in the 15th district but "the danger has been eliminated".

Nobody was hurt by the 200kg (31-stone) tiger, according to local reports.

Tram traffic was suspended in the area. Residents called the emergency services when they spotted the animal on the run just before 18:00 (17:00 GMT).

"It was a very big tiger," a witness called Ralph told Le Parisien website. "We heard two or three shots and saw police going down towards the tracks."

The tiger was killed in an alley, a fire service spokesman said.

Its owner, who brought the animal down with a shotgun, has been taken into custody, AFP news agency reports citing a police source. Police have opened an investigation.

The Bormann Moreno circus recently set up in Paris and planned to start holding shows from 3 December.

IcetruckNovember 24, 2017
Like story:
tweet
At least 235 killed in ‘horrific’ attack at Egypt mosque
Series Finale Alert: All the TV Shows Ending in 2018