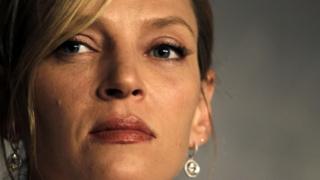 US actress Uma Thurman has sent out a Thanksgiving message venting anger at movie mogul Harvey Weinstein, who has been accused of sexual harassment and assault by dozens of women.

She did not detail any personal issues but added: "When I'm ready, I'll say what I have to say… stay tuned."

Her message wished a happy Thanksgiving to everyone "except you Harvey and all your wicked conspirators".

"I'm glad it's going slowly – you don't deserve a bullet," she added.

Writing on Instagram, Thurman said she had "a few reasons" to be angry.

She added: "#metoo in case you couldn't tell by the look on my face."

The hashtag has been used by women to share stories of sexual harassment and assault.

"I feel it's important to take your time, be fair, be exact," she said. "Stay tuned."

In an earlier interview, Thurman said it was commendable that women were speaking out about harassment and assault.

"I have learned, I am not a child and I have learned that… when I've spoken in anger, I usually regret the way I express myself," she said.

"So I've been waiting to feel less angry. And when I'm ready, I'll say what I have to say."

Thurman has appeared in a number of films that were produced by Weinstein, including Pulp Fiction and Kill Bill.

Meanwhile, representatives from Canada's film and TV industry have announced plans to establish a code of conduct "clearly defining expectations of appropriate and inappropriate behaviour".

Sixteen unions, guilds and associations have put their name to a commitment "to end sexual harassment… discrimination, bullying and violence."