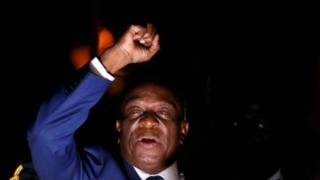 Emmerson Mnangagwa is to be sworn in as Zimbabwe's president, following the dramatic departure of Robert Mugabe after 37 years of authoritarian rule.

The former vice-president – who returned from exile on Wednesday – will be inaugurated at Harare's stadium.

His dismissal this month led the ruling Zanu-PF party and the army to intervene and force Mr Mugabe to quit.

He is not expected to attend Mr Mnangagwa's inauguration, the BBC's Andrew Harding reports.

The official explanation for Mr Mugabe's absence is that the 93-year-old needs to rest.

But the fact he is not attending is a stark reminder that this is no ordinary transition, our correspondent adds, that despite his official resignation he was forced out by the military.

The ceremony will be at the 60,000-capacity National Sports Stadium in the capital, with organisers calling on Zimbabweans to come and witness a "historic day".

Mr Mnangagwa pledged to create jobs in a country where some estimates say 90% of people are unemployed.

"We want to grow our economy, we want peace, we want jobs, jobs, jobs," he told cheering crowds in Harare.