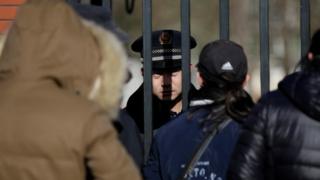 Beijing police are holding a 22-year-old female teacher suspected of carrying out abuse at a nursery school.

Officers are probing claims children at the nursery – run by RYB Education Inc – were pricked with needles, fed pills and stripped naked.

RYB says it "deeply apologises" for the matter, which has sparked outrage in China, where there've been a number of scandals involving childcare centres.

Police also held a woman for spreading false information about the case.

At least eight children attending the RYB Education pre-school in the upscale Chaoyang district are said to have been injected with unknown substances.

RYB Education issued a statement on Thursday (in Chinese) saying it was co-operating with police and would "not shake off the responsibility" if any wrongdoing was found.

It is one of China's most well-known early childhood education providers.

Parents told local media they had discovered needle marks on their children's bodies and that their children were fed pills or syrup before their naptime.

One father told state broadcaster CCTV that his child had said that every day after lunch they would be given two white pills, and told to "go to sleep".

The case has sparked an intense outcry and reignited anxieties over childcare standards in China, which has seen other cases of abuse at nurseries in recent years.

The incident comes weeks after a Shanghai childcare centre was alleged to have abused several toddlers.

Last year four teachers at a RYB nursery in Jilin province were jailed for abuse, also involving giving injections to children. State news agency Xinhua reported at the time that one child was found to have more than 50 needle marks.