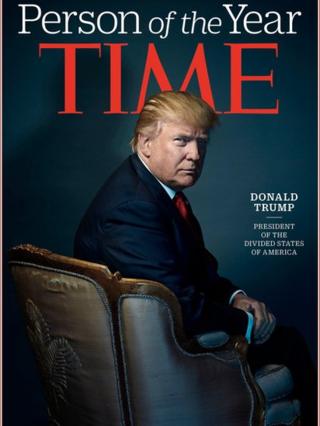 Donald Trump says he shunned Time over Person of the Year

Time Magazine is disputing US President Donald Trump's account of how he rejected a request for an interview and photo shoot ahead of its Person of the Year issue.

On Friday, Mr Trump tweeted that Time had called to say he was "probably" going to be named Person of the Year.

But Time later said the president was incorrect about how it makes its choice.

The president was awarded the title last year.

He has previously falsely claimed that he holds the record for cover appearances on Time Magazine.

Time said it did not comment on its choice until publication, and that its decision would be revealed on 6 December.

The publication invites readers to vote on who they think has earned the title, but the final decision is made by editors.

A former editor of the magazine, Richard Stengel, said the use of the word "probably" meant Mr Trump had missed out on the accolade.

In June, the Washington Post revealed that several of Mr Trump's golf clubs prominently display a framed copy of a fake Time cover featuring several positive headlines and Trump as its cover.

Richard Stengel referenced the report when he retweeted the president on Friday.

Tennis champ Andy Murray has also mocked President Trump – tweeting to say the BBC had called him about its Sports Personality of the Year award, which Murray won in 2013, 2015, and 2016.

Bbc just called to say I was PROBABLY going to be named sports personality of the year but I would have to agree to an interview and a major photo shoot. I said probably is no good and took a pass. Thanks anyway!

[email protected] just called to say I was PROBABLY going to be named comedienne of the year but I would have to agree to an interview and a major photo shoot. I said probably is no good and took a pass. Thanks anyway! @andy_murray