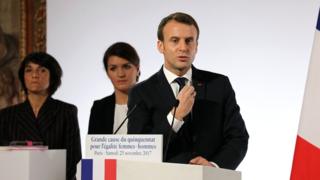 French President Emmanuel Macron has spoken out against domestic violence, saying it shames France that a woman is killed every three days.

In a speech marking International Day for the Elimination of Violence Against Women, he said the silence around the issue must be broken.

He has made gender equality one of the main themes of his five-year term in office.

A number of demonstrations are being held across France to mark the day.

"It's indispensable that the idea of shame changes sides, that the Republic cleanses its own concept of shame; that the everyday criminals who harass, insult, touch, attack never be excused, but identified, vilified, brought to justice, condemned as firmly as they should be," he said.

"And France should no longer be one of those countries where women live in fear."

During his election campaign last year, Mr Macron said the issue of violence against women would be a priority for his presidency.

Polls conducted by his then movement, En Marche, suggested that it was the French public's top concern.

During his speech, Mr Macron observed a minute's silence for the 123 women killed by their partner or ex-partner in 2016.

Nearly 225,000 women were physically or sexually abused by their spouses, but fewer than one in five filed a complaint about it.

Among the measures Mr Macron announced are a 24-hour online service for victims of violence, harassment or discrimination.

Victims will be able to speak to trained policemen and women to talk about incidents of sexual violence and harassment and find out how to report them.

An awareness campaign on pornography will be launched in secondary schools and the government will introduce a bill against sexual and gender-based violence next year, he said.

Other proposals include criminalising street harassment, extending the statute of limitation for the rape of children and aligning the presumption of consent with the age of sexual maturity fixed in law at 15 years.

Earlier this month, France's minister for gender equality Marlene Schiappa said the government was considering setting a fixed age below which sex was automatically a serious offence.

Other measures will include an app for victims of online stalking and "on-demand" bus stops in the evening, where women can stop a bus anywhere at night so they can get home safely. This service has already been tested in several towns, including Bordeaux.

International Day for the Elimination of Violence against Women kicks off 16 days of activism with sexual harassment as a focal point of this year.

IcetruckNovember 25, 2017
Like story:
tweet
Survivors recall attack on mosque in Egypt’s Sinai, 305 dead
‘The Smothers Brothers Comedy Hour’ at 50: The Rise and Fall of a Groundbreaking Variety Show