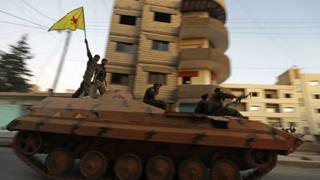 The US is to stop supplying arms to the Syrian Kurdish militia the YPG, Turkey has said.

Foreign Minister Mevlut Cavusoglu said President Donald Trump had made the promise in a phone call to his Turkish counterpart, Recep Tayyip Erdogan.

The White House said it was making "adjustments" to its support for partners inside Syria but did not explicitly name the YPG.

Turkey has long complained about US support for the group.

Washington has viewed the YPG as a key player in the fight against so-called Islamic State (IS), but Ankara brands the group's fighters as terrorists.

Turkey says the YPG is as an extension of the outlawed Kurdistan Workers Party (PKK), a group it has been fighting for decades in south-eastern Turkey.

The US, however, has seen the YPG as distinct from the PKK. In May it announced it would supply arms to the Kurdish elements of the Syrian Democratic Forces (SDF), which were poised to drive IS from its stronghold of Raqqa. It had previously armed only Arab elements of the SDF.

"President Trump instructed [his generals] in a very open way that the YPG will no longer be given weapons," Mr Cavusoglu was quoted as saying in the Turkish Hurriyet Daily News.

He said Mr Trump gave his assurances after President Erdogan reiterated his concern over the continued supply of weapons and armoured vehicles to the YPG.

If this is true, it would be a major shift in US policy. The Kurds have proved to be valuable partners in the fight against IS.

It is notable that Washington's account of the call does not mention taking away the arms that the Trump administration agreed to give the YPG earlier this year – something Ankara has called for. Turkey feared the weapons would end up in the hands of fighters intent on creating an independent Kurdish state.

The Pentagon is likely reassessing its needs in Syria as the fight against IS has waned in recent months. But whatever adjustments are being made, it is clear the US military has no plans to leave the war-torn country. It has been revealed that about 2,000 US troops are now based there – a significant increase since the Obama administration.

The White House confirmed the two leaders had spoken by phone and said Mr Trump "reaffirmed the strategic partnership" between the US and Turkey.

"Consistent with our previous policy, President Trump also informed President Erdogan of pending adjustments to the military support provided to our partners on the ground in Syria, now that the battle of Raqqa is complete," the statement said.

"We are progressing into a stabilisation phase to ensure that Isis [IS] cannot return. The leaders also discussed the purchase of military equipment from the United States."

The SDF, an alliance of Kurdish and Arab militias, has driven IS militants from much of the land it once controlled.

The YPG and its political arm, the Democratic Union Party (PYD), denies any direct links with the PKK, whose insurgency has left thousands dead.

But Mr Cavusoglu has previously said that every weapon obtained by the YPG constituted "a threat to Turkey".

The SDF declared victory in Raqqa last month after a four-month battle to retake the city from IS, which had ruled it for three years.