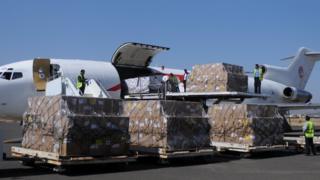 The first aid flights since the Saudi-led coalition imposed a blockade on rebel-held areas three weeks ago have landed in Yemen's capital, Sanaa.

The coalition imposed the blockade on 6 November, two days after rebels fired a missile at the Saudi capital, Riyadh.

The missile, fired by the rebel Houthi movement, was intercepted over Riyadh's international airport.

The arrival of aid flights comes three days after the coalition announced it would reopen the Red Sea port of Hudaydah for urgent humanitarian aid and Sanaa's airport to UN aid and relief flights.

Officials say no aid ships have docked at Hudaydah yet. The planned reopening followed a review by the coalition to ensure weapons do not reach the rebels.

It had been hoped the first aid shipments would arrive on Thursday but they appear to have been delayed as aid agencies negotiated time slots with coalition forces. Aid workers have warned that flights alone will not be enough to alleviate the suffering.

UN agencies had warned of dire consequences for "thousands of innocent victims" unless the delivery of life-saving supplies to all rebel-held ports was permitted.

More than 20 million people are in need of urgent humanitarian assistance. Eleven million of those are children – 400,000 are affected by severe acute malnutrition.

The Saudi-led coalition intervened in the war between forces loyal to President Abdrabbuh Mansour Hadi and the Houthis in 2015. Since then ground fighting and air strikes have killed more than 8,670 people, according to UN figures.

Saudi Arabia says the Houthi rebels are backed by Iran, its regional rival, something Iran denies.

IcetruckNovember 25, 2017
Like story:
tweet
Does cellphone-sweeping ‘StingRay’ technology go too far?
Donald Trump says he shunned Time over Person of the Year