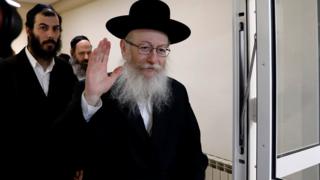 An Israeli government minister has resigned in a dispute about railway maintenance on the Sabbath.

Ultra-orthodox Jews object to work being carried out on the Sabbath – the Jewish day of rest.

However, the coalition does not appear to be in jeopardy for now.

A spokesman for Mr Litzman's party told AFP it had no plans to leave the coalition "at this stage".

Mr Netanyahu, whose government has only a slim parliamentary majority, said all members of the coalition were in favour of its continued existence.

"The Sabbath, as well as the needs of all Israeli citizens, including, of course, the need for safe and consistent transportation are important to us. I'm sure that we will find an educated solution to this," he said.

In his resignation letter, Mr Litzman said: "I cannot bear ministerial responsibility for the severe harm to one of the eternal values of the Jewish people, which is the Sabbath."

Essential railway maintenance work is less disruptive for travellers if it is carried out on the Sabbath, as no trains run between sunset on Friday and sunset on Saturday.

Israel Railways said that some maintenance work on the Sabbath must be carried out to avoid congestion and ensure public safety.

Ultra-orthodox parties, which hold 13 of the government's 66 seats in parliament, have played an increasingly important role in Israeli politics in recent years.

Parties, such as Mr Litzman's, adhere to a policy of strict obedience to Jewish law.