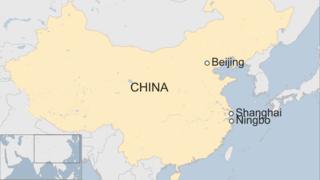 A large explosion has been reported in the eastern Chinese port city of Ningbo, south of Shanghai.

The blast reportedly occurred at a factory at about 09:00 (01:00 GMT) in the city's Jiangbei District, causing some nearby buildings to collapse.

Local media reported that at least 30 people had been taken to local hospitals amid rescue operations.

Police said on social media that an investigation was under way to determine the cause of the explosion.