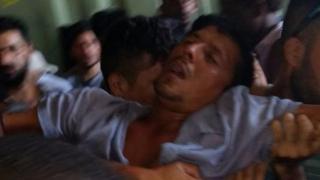 A group of senior Australian doctors has sent a letter to the nation's government offering free treatment to asylum seekers in Papua New Guinea.

On Friday, about 300 asylum seekers left a former Australian-run detention centre on PNG's Manus Island in what the UN called a "forcible removal".

The men have expressed fears for their safety on Manus Island, where they are now housed in transit centres.

Doctors say they are "deeply concerned" about their physical and mental health.

About 600 asylum seekers refused to leave the Manus Island camp when it closed on 31 October, with many spending weeks in squalid conditions after water and electricity were cut off.

"We are senior Australian clinicians who write in our individual capacity to express our concerns about the ongoing health and well-being of the former detainees," the doctors wrote in the open letter.

The doctors offered to fly specialists to the island, and has asked for Canberra to sanction the aid and give them diplomatic permission.

The asylum seekers and refugees, all of whom are men, have been moved to alternative accommodation on the island. The Australian government says the sites are secure and have food and medical services.

However, the UN's refugee agency says medical care remains inadequate, noting that torture and trauma counselling services for the men – most of whom have refugee status – are "completely unavailable".

On Friday, it condemned allegations that asylum seekers were beaten with metal poles by PNG police as "shocking and inexcusable".

The Australian government described claims of violence as "inaccurate and exaggerated" and accused refugee advocates of stirring up trouble.

Canberra shut down the detention centre after a PNG court ruled it was unconstitutional.