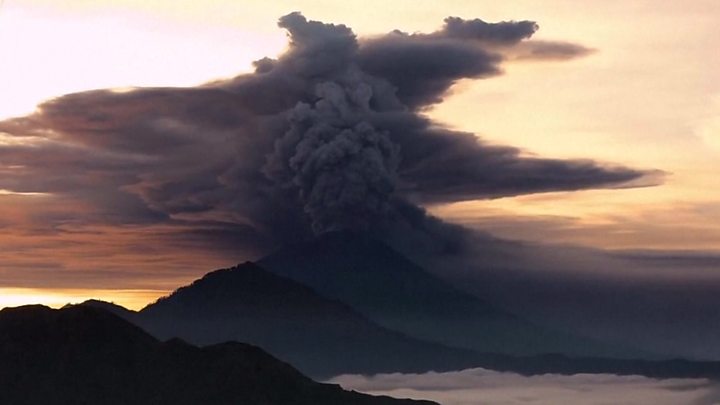 Airlines have been issued a "red warning" about the danger of volcanic ash in the skies close to Bali after Mount Agung emitted a thick plume of smoke reaching 4,000m (13,100 feet).

It is the second major emission from the Indonesian island volcano this week, and flights have been disrupted.

The red warning means an eruption is forecast to be imminent, with significant emission of ash likely.

Authorities have begun distributing masks in some areas as ash falls.

Bali is a major tourist destination, although the main resorts of Kuta and Seminyak are about 70km (43 miles) from the volcano.

The island's main airport is for now operating normally, but some airlines have cancelled flights. Volcanic ash can damage plane engines.

Travellers to and from the region are being urged to contact their airline or travel agent to find out the status of their flight.

The ash cloud is said to be moving eastward from Bali towards the island of Lombok, and the main international airport there has been closed entirely.

The information director of Indonesia's Disaster Mitigation Agency tweeted that volcanic ash rain had fallen on the Lombok city of Mataram.

"Tourism in Bali is still safe, except in the danger (zone) around Mount Agung," the agency said in a statement.

It told people within a 7.5km exclusion zone to "immediately evacuate" in an "orderly and calm manner".

Magma – molten rock – has now been detected close to the volcano's surface, said officials and volcanologists.

About 25,000 people are thought to still be in temporary shelters after more than 140,000 people fled earlier this year. Increased volcanic activity had prompted fears a major eruption was imminent.

Most of the islanders outside the immediate exclusion zone were ordered to return home at the end of September, and the mountain has been intermittently rumbling since.

According to official estimates, the holiday island lost at least $110m (£83m) in tourism and productivity during the major evacuation.

Are you in the area? What are conditions like currently? If it is safe to do so, email [email protected]