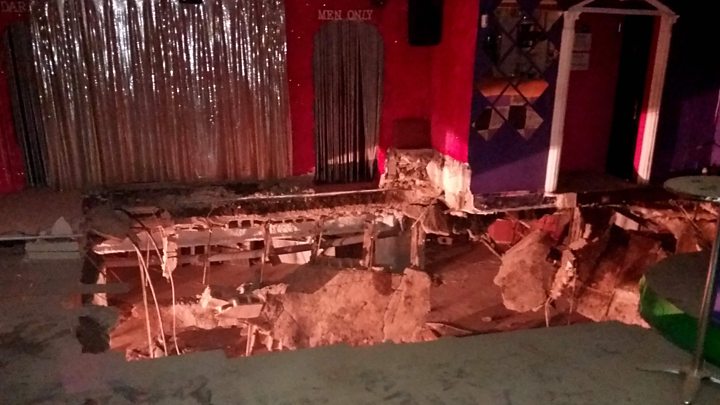 The dancefloor of a nightclub in Tenerife has collapsed, injuring 40 people.

Clubbers fell through the floor to the basement of the Butterfly Disco Pub at about 02:30 local time (02:30 GMT) on Sunday morning.

The club is in a shopping centre in Playa de las Americas, a clubbing hotspot in the south of the Spanish island popular with tourists.

Those injured are said to be from a number of different countries, including Spain, France, the UK, Belgium and Romania.

The number of casualties rose from 22 to 40 as it emerged that 18 had made their own way to hospitals.

Two of those injured were seriously hurt, suffering fractures to the femur, or thigh bone, reported the local government. The remainder are believed to have suffered moderate to light injuries.

Emergency services scrambled to the scene after a large section of the dancefloor gave way, and spent the next few hours evacuating the wounded.

"After the floor collapsed, the people who were inside fell to the basement from the height of approximately one floor," said the regional government in a statement quoted by AFP news agency.

Have you witnessed these events? E-mail us at [email protected]