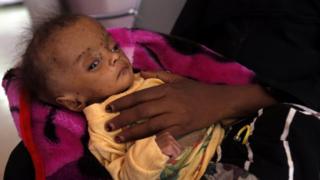 A UN aid ship carrying food supplies has been allowed to dock at a rebel-held port in Yemen, after the Saudi-led coalition eased a blockade that has lasted for nearly three weeks.

The blockade worsened the plight of millions at risk of starvation.

Planes carrying medical supplies were allowed to land in the capital, Sanaa, on Saturday but this is the first shipment of food aid to be let in.

The blockade was imposed on 6 November after a missile attack on Saudi Arabia.

The coalition blocked off land, sea and air routes two days after the Houthi rebels they are fighting in Yemen fired the missile at the Saudi capital, Riyadh. It was intercepted over the international airport.

The UN ship, loaded with thousands of tonnes of desperately-needed wheat, has arrived at the port of Saleef.

He said the ship had been forced to "hover off the coast" for two weeks waiting for permission to enter.

A commercial ship carrying 5,500 tonnes of wheat flour earlier docked at the key port of Hudaydah, south of Saleef and also controlled by the Houthi rebels.

"This is also a positive development because humanitarian aid alone will not address the full needs of the people who are in northern Yemen, particularly those who we are not able to assist, those who are slightly better off and who depend on markets," Mr Anderson said.

Earlier this week, the Saudi-led coalition announced it would reopen access to the Hudaydah port for urgent humanitarian aid and Sanaa's airport to UN aid and relief flights.

The easing of the Saudi-led blockade followed a review by the coalition to ensure weapons do not reach the rebels. Saudi Arabia accuses Iran of supplying arms to the Houthis, which Tehran denies.

Planes that arrived in Sanaa on Saturday carried 1.9m doses of vaccines, but the UN's agency for children, Unicef, says that is just a small fraction of what is needed.

"I reiterate my plea to everyone with a heart for children, indeed not to prevent us from delivering what is urgently needed and massively needed," Unicef Middle East Director Geert Cappelaere told Reuters news agency. "Yesterday was just a very small step."

More than 20 million people in Yemen are in need of urgent humanitarian assistance. Eleven million of those are children and 400,000 are affected by severe acute malnutrition.

The coalition intervened in the war between forces loyal to President Abdrabbuh Mansour Hadi and the Houthis in 2015. Since then ground fighting and air strikes have killed more than 8,670 people, according to UN figures.