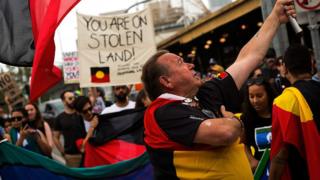 For many Australians, particularly young people, a music countdown known as Triple J's Hottest 100 is a key part of the annual Australia Day holiday.

But radio station Triple J revealed on Monday that it will move the annual event amid debate that the day is insensitive to indigenous Australians.

The decision by the station, part of the Australian Broadcasting Corp, has generated a large response online.

The government, a supporter of Australia Day, criticised the decision.

The Australia Day bank holiday on 26 January marks the anniversary of British settlement in 1788, a date many Aboriginal and Torres Islander people consider offensive.

Triple J said the Hottest 100 – which counts down listeners' favourite songs of the year – will now be held on the fourth weekend in January, just after Australia Day, in acknowledgement of "increasing debate" the holiday.

"It should be an event that everyone can enjoy together," said the station, adding the decision had been supported by two surveys.

The announcement drew an immediate response on social media, where views were divided.

So much respect to Triple J for standing up for Indigenous Australians by changing the date of the Hottest 100 from Australia Day.

Disappointed re: Hottest 100.
I'm not against the reasons for moving it BUT it's existence along side Oz-day made both things better.

Maybe I'm in the minority, but as a loyal @triplej listener, I'm pretty disappointed the Hottest 100 won't be on Australia Day next year

"This constant push to politicise and delegitimise Australia Day is pathetic," he wrote on Twitter.

Triple J said it received almost 65,000 responses to a survey asking whether the countdown should be moved. A representative sample of the results showed 60% supported change.

A second, smaller poll showed a similar result, according the youth broadcaster, which has a target demographic of people aged 18 to 24.

It said it had consulted numerous musicians and community groups – many of them indigenous – before reaching its decision.

According to a recent survey, more than 70% of Australians identify the day as important to them, but only 43% could name its historical origin.