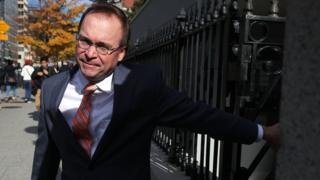 The US consumer financial watchdog was plunged into turmoil on Monday as rival directors vied to take charge amid a lawsuit against the White House.

She has sued after President Donald Trump instead named his budget chief Mick Mulvaney to lead the CFPB.

The CFPB, unpopular on Wall Street, was set up after the 2007 financial crash.

Leandra English sent the agency's staff a brief email on Monday saying: "It is an honor to work with all of you."

But Mr Mulvaney – who has previously called the CFPB a "sick, sad joke" that should be scrapped – arrived at the bureau on Monday morning carrying a bag of donuts for employees.

He wrote in a memo to staff: "Please disregard any instructions you receive from Ms English in her presumed capacity as Acting Director."

Mr Mulvaney also signed off as "acting director", urging staff to pop by his office on the fourth floor and "grab a donut".

"High drama" and "bureaucratic power struggle" are words that don't usually go together, but these are unusual times in Washington, DC.

A donut-carrying Republican who seemingly hates the controversial agency he's been tasked with running is up against a Democratic-appointed official who has filed a lawsuit that reaches new heights of legal snarkiness.

Behind it all is the fact that the CFPB is a key component of Democratic attempts to rein in what they viewed as the recklessness and cruelty of big US financial institutions that contributed to the financial collapse of 2008. Republicans, on the other hand, consider the bureau to be a regulatory beast stifling economic growth.

Given that conservative attempts to change the agency through legislation have run aground in the political morass that is the US Congress, the future of the CFPB largely rests in who is put in charge.

In other government entities, such as the Environmental Protection Agency, the State Department and the Justice Department, Trump loyalists are hard at work altering the culture and curtailing the ambitions of federal bureaucrats.

Now the administration has a chance to go to work on the CFPB. Democrats, however, are seemingly eager for a high-profile fight.

What is the CFPB?

The 1,600-employee watchdog was set up in 2010 to protect Americans from predatory lenders.

Republicans say it has placed an excessive regulatory burden on Wall Street.

Democrats say the CFPB is reining in the very excesses that helped spur the global financial crash a decade ago.

Mr Trump took to Twitter on Saturday to criticise the agency, calling it a "total disaster".

He argued that because of the CFPB "financial institutions have been devastated and unable to properly serve the public".

Richard Cordray quit as CFPB director on Friday amid speculation he may run for governor of Ohio next year.

The Consumer Financial Protection Bureau, or CFPB, has been a total disaster as run by the previous Administrations pick. Financial Institutions have been devastated and unable to properly serve the public. We will bring it back to life!

What about this lawsuit?

On Sunday, Ms English asked a judge at a federal court in Washington DC to issue a temporary restraining order against Mr Trump's appointment of Mr Mulvaney.

In her lawsuit, she called herself the "rightful acting director" of the CFPB.

The legal action said: "The President's purported or intended appointment of defendant Mulvaney as Acting Director of the CFPB is unlawful."

The White House says the president has the authority to appoint Mr Mulvaney under the Federal Vacancies Reform Act.

But a lawyer for Ms English says the law states that as deputy director she is entitled to take power until the Senate can vote to confirm another director.

The lawsuit has been assigned to a judge who was appointed this year by President Trump, Reuters news agency reports.

Arkansas Republican Senator Tom Cotton, a member of the chamber's banking committee, called Ms English's lawsuit "just the latest lawless action" by the CFPB, which he called "rogue" and "unconstitutional".

"The President should fire her immediately and anyone who disobeys Director Mulvaney's orders should also be fired summarily," Mr Cotton wrote in a statement.

"Wall Street hates it like the devil hates holy water," he said.

The process for succession laid out in Dodd Frank is clear: Leandra English, not Mick Mulvaney, is the acting dir of @CFPB. By attempting to install Mr. Mulvaney as director, the Trump admin is ignoring the established, legal order of succession that we purposefully put in place.

And how has Elizabeth Warren got involved?

The left-wing senator from Massachusetts was one of the driving forces behind the creation of the CFPB and over the weekend she launched a stinging attack on the president.

"Less than a decade after taxpayers bailed out the big banks, the banking industry made record profits last year," she tweeted.

"That's who you're worried about, realDonaldTrump?"

It was therefore probably no coincidence that Mr Trump on Monday used his nickname for her, Pocahontas, to describe her to an audience of Native Americans.

Mrs Warren, who has Native American heritage, responded by saying it was "deeply unfortunate" that the president "can't even make it through a ceremony honouring these heroes without throwing out a racial slur".

The White House denied the term was racial.