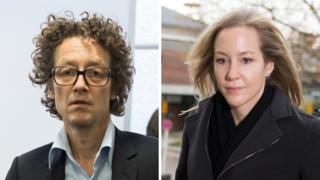 The son and daughter of a German retail tycoon have been jailed for more than two years each in a bankruptcy case.

Anton Schlecker was on trial with his wife and two children over the collapse of his pharmacy chain, which once employed some 50,000 people.

The Stuttgart court, in south-west Germany, found that the family had enriched themselves with several million euros before the bankruptcy.

The embezzled funds should have gone to shareholders.

In Germany about 25,000 Schlecker staff lost their jobs, as did a similar number elsewhere in Europe, after the business filed for bankruptcy.

Lars and Meike ran a logistics firm called LDG which, prosecutors said, was used to siphon off assets from the Schlecker company.