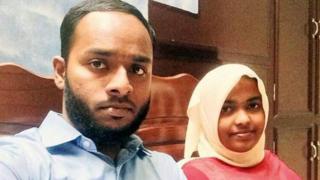 An Indian woman at the centre of an inter-religious marriage row may leave her father's custody and resume her studies, the Supreme Court has ruled.

Hadiya Jahan, who is in her 20s, was born into a Hindu family, but converted to Islam and married a Muslim man.

Her family alleges she was brainwashed as part of an anti-Hindu conspiracy. In May, her marriage was annulled.

The court did not accept that she did not know her own mind. It has still to rule on whether her marriage is legal.

Marriages between Hindus and Muslims have long attracted censure in conservative Indian families, but the attachment of a deeper, sinister motive to them is a recent phenomenon.

Hadiya Jahan, earlier known by her Hindu name Akhila Asokan, has always insisted that she acted out of her own free will.

She had asked the Supreme Court to let her husband, Shafin Jahan, be her guardian. But it named her college dean as guardian while the case continues.

Radical Hindu fringe groups have described her case as a typical example of "love jihad" – a term they use to accuse Muslim men of participating in a "conspiracy to turn Hindu women from their religion by seducing them".

Ms Jahan and her husband appealed after the high court in the state of Kerala annulled their marriage. The Supreme Court ordered an independent investigation.

She was summoned to testify by the top court on whether she had been forced to convert.

Ms Jahan told the three-judge bench, headed by Chief Justice Dipak Misra, that she wanted her freedom and to see her husband, who would support her financially.

"I want to complete my studies and want to live my life according to my faith and as a good citizen," she said, the Hindustan Times reports.

She also said that she had been kept in "unlawful custody" for 11 months by her parents.

The court removed Hadiya from her father's custody and said she could live in the college hostel to finish her education. The judges also ordered police protection for her.

The next hearing is scheduled for late January.