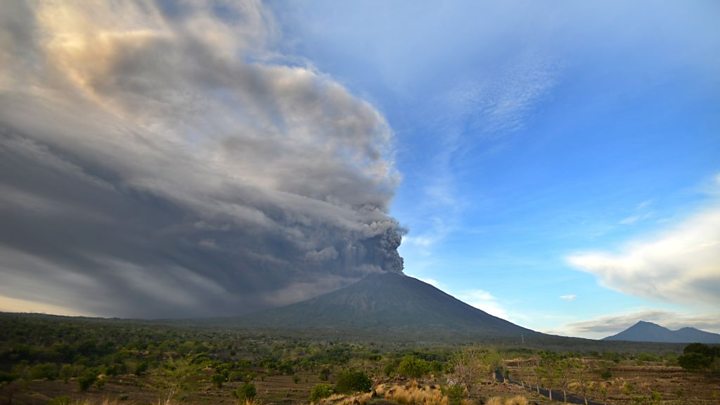 About 100,000 people near Bali's Mount Agung have been ordered to evacuate as officials fear a major eruption.

Indonesian authorities have raised the state of alert to its highest level, and expanded the exclusion zone around the rumbling volcano.

The island's airport has now closed, leaving thousands stranded in the tourist hotspot.

Authorities say dark gas and ash have been billowing up to 3,400m (11,150ft) above the mountain's summit.

Officials have warned residents to stay away from rock and debris flows known as lahars, which have been spotted flowing down from the mountain.

How close is it to a major eruption?

The National Board for Disaster Management raised the alert to level four from 06:00 local time (22:00 GMT Sunday) because of "the possibility and imminent risk of disaster".

The volcano was seen emitting "continuous ash puffs" occasionally accompanied by "explosive eruptions" and "weak booms" that could be heard 12km (7 miles) away from the summit.

"The rays of fire are increasingly observed at night. This indicates the potential for a larger eruption is imminent," it said in a statement (in Indonesian) on its Facebook page.

Geologist Mark Tingay of the University of Adelaide told the BBC that Mount Agung now appears to be entering the next phase with a magmatic eruption, where the glow of lava is visible from the crater.

But he added that as eruptions are difficult to predict, it was "very hard to tell" how the situation would develop. "These eruptions can be quite large and extensive and violent, but this could also be a relatively minor eruption over time."

He added that Indonesian authorities had made preparations for an eruption for months, and said they appeared "extremely well prepared", with the situation "well under control".

Should tourists be worried?

The main tourist stretch of Kuta and Seminyak is about 70km (43 miles) from the volcano, far beyond the exclusion zone.

But the ash prompted officials to shut down Bali's Ngurah Rai airport from Monday to Tuesday morning.

The Australian government and the UK's Foreign Office have advised travellers to be prepared for cancelled flights, closely monitor local media, and to heed local authorities' warnings.

China (statement in Chinese) advised its citizens to be "cautious" if travelling to Bali.

The airport on neighbouring island Lombok reopened on Monday morning after it was shut briefly.

How are locals coping?

Authorities have widened the exclusion zone to a 10km (6 mile) radius from the volcano, and have ordered people in the area to evacuate.

A spokesman for Indonesia's disaster agency, Sutopo Purwo Nugroho, said that some people within the exclusion zone did not leave because the area was not touched the last time it erupted – more than 50 years ago.

Officials have been distributing masks for local residents, as ash rains down in the vicinity.

Anna Baranova, who works with non-governmental organisation Kopernik that is helping evacuees, said her group was trying to bring in better masks and possibly goggles.

"There's some effort to distribute information and also solar powered TV units which will broadcast information about the evacuation to the camps, should the electricity go out if there's an eruption," she told the BBC.

Lahars, also known as "cold lava", are slurries of rock fragments mixed with water, and have been spotted in fields and rivers near the volcano.

Mr Nugroho warned that lahars may increase due to heavy rain and as Mount Agung continues to emit pyroclastic material.

He has urged islanders to stay away from lahars, as well as avoid activities near rivers.

Authorities first issued warnings of an imminent eruption and raised the alert to the highest level two months ago, after detecting heightened volcanic activity.

Following mass evacuations, some islanders returned to their homes in October when the alert level was lowered with a decrease in activity.

According to official estimates, the holiday island lost at least $110m (£83m) in tourism and productivity during that major evacuation.

Is this common for Indonesia?

Indonesia sits on the Pacific "Ring of Fire" where tectonic plates collide, causing frequent seismic and volcanic activity. It is home to more than 130 active volcanoes.

Scientists monitoring around the clock

No-one can really say at this stage how things will turn out. The volcano might dampen down or the activity could evolve into a very big eruption.

Scientists have a network of seismometers around Agung that allow them to follow its rumblings, which give them clues as to what is going on inside. This will be complemented by gas detectors. Again, this gives the researchers insights into the physical processes in play.

On top of that the scientists have access to satellite observations. Already these have detected an increase in sulphur dioxide emissions. Radar spacecraft in particular are taking a close look at Agung. They can sense any subtle changes in the shape of the volcano that might indicate a very large volume of magma is moving closer to the surface.

It is complex work but the experts in this field are relatively convinced that a slow uplift on the northern flank has been going on for some time. It may come to nothing, but high-resolution radar data is now being studied to see if more pronounced changes are occurring.