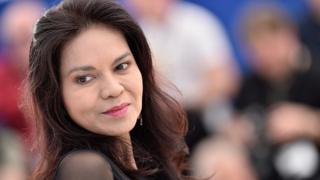 Actress Maria Isabel Lopez has had her driving licence revoked in the Philippines after she used a driving lane reserved for dignitaries attending a key summit in Manila, officials say.

The Filipina movie star has been fined and barred from reacquiring a driver's licence for the next two years.

Ms Lopez is reported to have said she had to use the lane reserved for summit officials to have a "bladder break".

The award-winning actress, 55, said on Facebook that she needed "a bladder break" because she had been travelling by road for hours.

But the country's transport department accused her of dangerously removing orange cones that cordoned off a lane in the road for officials attending the Association of South East Asian Nations (Asean) meeting earlier this month.

Ms Lopez posted a video online, in which she could be heard shouting "Yeeeeeo! Asean, here I come!", as her vehicle entered the VIP lane.

Transport officials accused her of endangering her own life, and the lives of dignitaries and commuters.

The Transportation Office said that she had "expressly admitted her failure to meet the conditions concomitant with the grant of her licence", and that the defence she proffered was "considered lame and self-serving".

It added: "Worse, she showed no remorse and even publicised with gusto her improper and illegal acts on social media, which betrays her utter lack of responsibility as a licensed driver, thus making her an improper person to operate a motor vehicle."

Ms Lopez wrote on Facebook that she had deceived traffic enforcers into believing she was an official Asean delegate.

"If you can't beat them, you join them," she wrote, alongside her video. "I removed the divider cones!! Then all the other motorists behind me followed!"

She later apologised to those who were "hurt and affected" by her actions and has urged the authorities to treat her leniently.

Manila is known for having some of the worst traffic jams in the world.