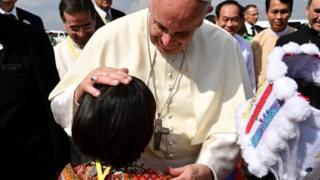 Pope Francis has arrived in Myanmar for the first papal visit to a country widely accused this year of ethnic cleansing of Rohingya Muslims.

The focus is likely to be on whether he uses the term "Rohingya" to describe the group, who the US and UN say are the victims of ethnic cleansing.

Myanmar officials reject the term, raising fears it could spark violence by the Buddhist majority if he does.

He is then due to visit Bangladesh, and meet a small group of Rohingya refugees there in a symbolic gesture. The 80-year-old pontiff has become known for his moderate views and willingness to denounce global injustice.

More than 600,000 Rohingya have fled Myanmar (also called Burma) for neighbouring Bangladesh since August when deadly attacks on police posts by Rohingya militants prompted a military crackdown in Rakhine state.

The Pope used the term "our Rohingya brothers and sisters" while denouncing the violence, but Myanmar's sole Catholic cardinal has asked him to avoid using it on the trip, to avoid inflaming local feelings.

Vatican spokesman Greg Burke told reporters on Monday that Pope Francis was taking advice he had been given seriously, adding: "We will find out together during the trip… it is not a forbidden word."

Myanmar officials do not use the term, instead labelling Rohingya as "Bengalis", and say they migrated illegally from Bangladesh so should not be listed as one of the country's ethnic groups. Bangladesh denies they are its citizens.

Myanmar says the crackdown in Rakhine is to root out violent insurgents there, but the UN has described the violence as a "textbook example of ethnic cleansing" – a sentiment echoed by international critics.

Papal aides say he will use the six-day trip to encourage reconciliation after last week's tentative agreement.

On Monday, he was due to privately meet Gen Min Aung Hlaing, the powerful military commander who has been leading the campaign to drive out the Rohingya.

Hundreds of people lined the streets of Yangon, the country's commercial capital, to catch a glimpse of the pontiff and his motorcade as it passed by.

"We come here to see the Holy Father. It happens once in hundreds of years," Win Min Set, who had brought a group of 1,800 Catholics to the city, told Reuters news agency.

"He is very knowledgeable when it comes to political affairs. He will handle the issue smartly," he added.

The visit was organised before the crisis, when the Pope met Ms Suu Kyi at the Vatican in May. The former Nobel Peace Prize laureate, who he is meeting on Tuesday, has faced fierce criticism for failing to do more to resolve the crisis.

Catholics make up just over 1% of Myanmar's 53m population, with many expected to see the Pope hold mass in Yangon on Wednesday.

He will then become the first Pope to visit Bangladesh, which is overwhelmingly Muslim, since 1986. He travels there on Thursday.