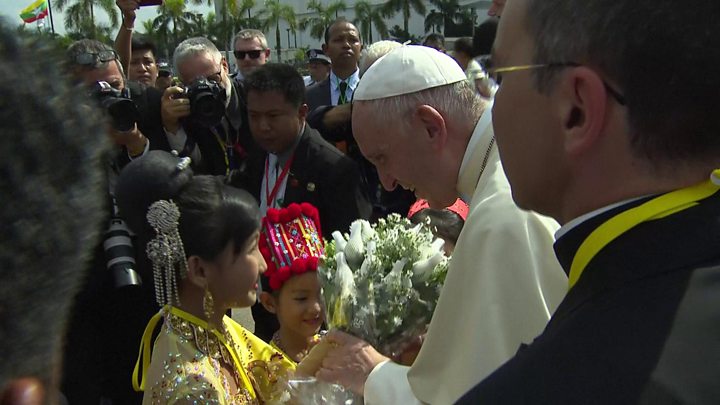 Pope Francis has met Myanmar's military chief, as he begins the first papal visit to a country widely accused of ethnic cleansing of Rohingya Muslims.

Officials in the Buddhist-majority country are watching closely to see how the Pope responds to the crisis.

He has been urged by governments and rights groups to pressure them over their treatment of the Rohingyas.

More than 600,000 Rohingya have fled Myanmar (also called Burma) for neighbouring Bangladesh since August when deadly attacks on police posts by Rohingya militants prompted a military crackdown in Rakhine state.

As part of his visit to the region, the Pope is also due to meet de facto leader Aung San Suu Kyi.

After Myanmar, he will move on to Bangladesh to meet a small group of Rohingya refugees in a symbolic gesture. The 80-year-old pontiff has become known for his moderate views and willingness to denounce global injustice.

Gen Hlaing said he had told the pontiff that "there's no religious discrimination in Myanmar and there's the freedom of religion", according to his latest Facebook post. It is not known how the Pope responded.

He has previously used the term "our Rohingya brothers and sisters" while denouncing the violence, but Myanmar's sole Catholic cardinal has asked him to avoid using it on the trip, to avoid inflaming local feelings.

Vatican spokesman Greg Burke told reporters on Monday that Pope Francis was taking advice he had been given about using the term "Rohingya" seriously, adding: "We will find out together during the trip… it is not a forbidden word."

Myanmar officials do not use the term, instead labelling Rohingya as "Bengalis", and say they migrated illegally from Bangladesh so should not be listed as one of the country's ethnic groups. Bangladesh denies they are its citizens.

Myanmar says the crackdown in Rakhine is to root out violent insurgents there, but the UN has described the violence as a "textbook example of ethnic cleansing" – a sentiment echoed by international critics.