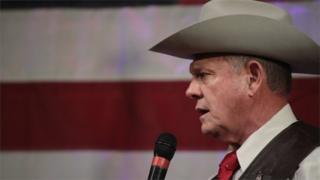 US President Donald Trump does not plan to campaign for a Republican candidate who is embroiled in allegations of child sex abuse, the White House says.

But White House officials said on Monday the Republican president is not scheduled to hit the trail for Mr Moore ahead of the election on 12 December.

A number of top Republican senators have called on 70-year-old Mr Moore to step aside following claims he molested or harassed teenage girls as young as 14 while he was in his 30s.

"Liberal Jones would be BAD!" Mr Trump wrote over the weekend about Doug Jones, who polls show is nearly neck and neck with Mr Moore in the staunchly conservative Deep South state.

White House spokeswoman Lindsay Walters told The Hill, a political newspaper, "there is nothing on his schedule at this time" when asked about the possibility of Mr Trump travelling to Alabama.

Seven women have accused Mr Moore of pursuing sexual relationships with them when they were teenagers and he was a 30-something prosecutor.

One was 14 and alleges he molested her. Another says he tried to rape her.

Two other women who were in their 20s at the time accuse him of making unwanted advances.

Meanwhile, Mr Trump has reportedly been saying a recording in which he infamously bragged that his fame entitled him to grab women's vaginas is a fake.

Despite the fact that he immediately apologised for the remarks when the Access Hollywood tape surfaced in October 2016, Mr Trump has recently disputed the veracity of the video, according to the New York Times.

The newspaper reported: "He suggested to a senator earlier this year that it was not authentic, and repeated that claim to an adviser more recently."

The Democrats have their own problems with sexual misconduct claims.

Minnesota Senator Al Franken is fighting for his career amid accusations he groped women.

At a press conference on Monday, he maintained he would not resign and said: "To all of you, I just want to again say I am sorry.

"I know there are no magic words that I can say to regain your trust and I know that's going to take time."

And John Conyers is stepping down as senior Democrat on the House of Representatives Judiciary Committee as lawmakers investigate sexual harassment claims against him.

The 88-year-old Michigan representative's office has acknowledged resolving a harassment case with a payment but no admission of guilt.

Asked if she believed in Mr Conyers' accusers, she said: "I don't know who they are. Do you? They have not really come forward."